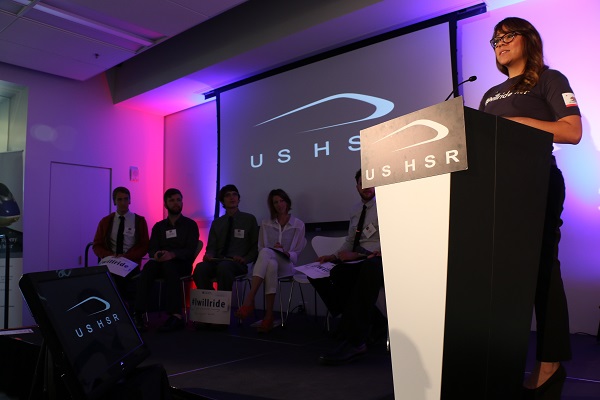 In the debate surrounding the California High Speed Rail Project, one perspective that hasn’t been given much weight is that of younger generations. Stepping back, this is strange. After all, they’ll be the ones who get the most use from the train. They’ll be the ones paying back the infrastructure bonds that California’s voters approved in 2008. And they’ll be the ones that are negatively impacted if nothing gets built—stuck in traffic on aging roads, stuck in overcrowded airports, and hurt by a U.S. economy that is unable to compete globally because of second-rate infrastructure.

That’s all changing. Young Californians are beginning to see the need to get involved in advocating for the project. And with NARP’s help, they’re recruiting their friends to help advocate for more passenger rail service in America.

We saw this campaign in action at the US High Speed Rail Association's West Coast Rail Conference held last week in San Francisco when NARP mobilized young Californians to speak at a luncheon. The seven-speaker panel included three NARP members: Rebecca Sansom, Director of Trains-forming America; Jeffery Tucker, Student Engineer at Amtrak; and Andrew McLane, recent San Francisco State graduate. They all were more than willing to give a testimonial on how vital the high speed service will be to their and future generations’ quality of life.

Andrew took it upon himself to recruit four other friends from San Francisco State; Molly Ruhl, Matt Kreizenbeck, Erik Tallen, and Lawrence Hood to speak at the conference as well. In 48 hours, young NARP members were able to come together and organize a successful show of support for the CA HSR project.

Attendees of the luncheon, which included representatives from Siemens and other stakeholders in the project, were thrilled and encouraged by the support of these Millennials.

Thank you NARP members for your dedication and efforts to reinforce the importance of this project. Millennials want a world class rail system, and they aren’t afraid to work for it!