William Graham Claytor, Jr. Destroys the Media’s View on Rail in 1985 and today

“Mr. Claytor, if President Reagan gets his way, all federal subsidies to Amtrak will end September 30. How many passenger trains will you be able to run then?”

William Graham Claytor, Jr.’s answer was, as always, direct and non-negotiable, “NONE.” Mr. Claytor was Amtrak’s president from 1982 until 1993. He came out of retirement after serving as deputy secretary of defense, Secretary of the Navy, president of the Southern Railway and a Washington, D.C. attorney. Claytor was president of the Harvard Law Review, and served as clerk to the famous Justice Learned Hand. His law career was briefly interrupted when he took command of several naval combat vessels during World War II and led a daring rescue at sea that became a newsreel feature in motion picture theaters throughout the nation. He was known as an independent thinker.

The Reagan Administration appointed Claytor, a Democrat, because he was genuinely considered the best qualified man for the job. And in spite of advice that he would also be the most difficult to “control.” As he said to one of his vice-presidents, “I don’t care if they [the Reagan-appointed board] fire me. I’m going to do what I think is right.” As head of Amtrak, he was fiercely dedicated to the preservation of Amtrak’s network including the long distance routes.

Congressmen accustomed to facing a full witness table of “assistants” when various agencies testified were back-footed when Claytor sat alone as the Amtrak witness. His direct manner, his knowledge, and his experience in the private sector, made him an ideal, completely credible defender of Amtrak when it faced hostility both from the White House and certain quarters on Capitol Hill.

Sorry to say Mr. Claytor, times haven’t changed. Amtrak ridership continues to set records. It is evident that this nation’s government needs to focus on investing in infrastructure and a practical mode of transportation for the collective good of communities around the country. Yet we still see attack headlines questioning the need for Amtrak or a big part of it.

NARP and America’s travelers profoundly thank William Graham Claytor Jr. for a lifetime of steadfast and superb service to this Nation, for his willingness to assume major new public challenges at a time when his peers had long ago retired, for his ability to profoundly change the course of events, from the lives of the sailors of the U.S.S. Indianapolis to the preservation of national rail passenger service, and for his brilliant stewardship of Amtrak.

In the article attached below, you’ll see answers to many questions still asked about Amtrak and its system. Responding to allegations of the Northeast Corridor being profitable, and more dangerously, severable from the rest of the system, Claytor’s plain-spoken and positively shattering tone should have resonated through the ages—and it’s surprising that it hasn’t. The questions asked below are many of the same questions asked by the media today, using the same misdirected logic that Claytor so effectively dismembered here. Really, this article is a masterful primer to passenger rail advocacy. 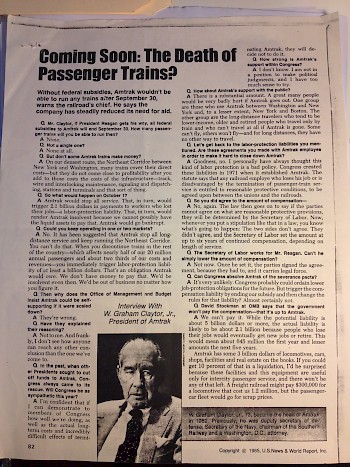 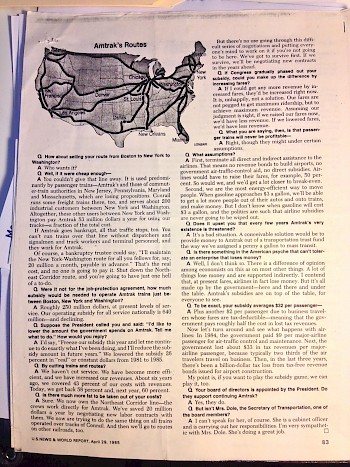