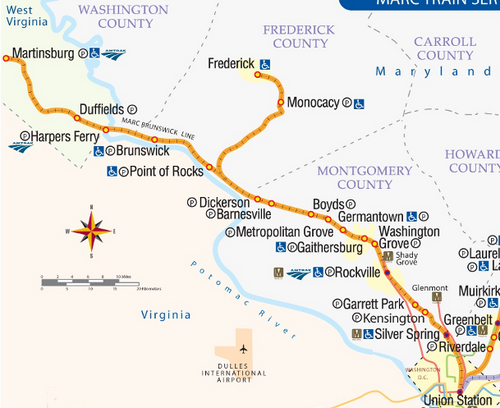 For several decades, the Brunswick Line of Maryland’s MARC commuter rail service has served the West Virginia towns of Harpers Ferry, Duffields, and Martinsburg. Hundreds of commuters use this line every day to commute to and from their jobs in the Washington, D.C. suburbs. Like many other commuter rail services, the Brunswick Line has enjoyed increased ridership in recent years. Now, more than ever, commuter rail is an integral part of the region’s transportation network.

West Virginia’s legislature recognized the importance of commuter rail last year by passing the Commuter Rail Access Act. Under the terms of the legislation, West Virginia will for the first time contribute funds to offset the costs of operating the trains. Provision of these funds will, in turn, allow Maryland and West Virginia to negotiate a formal interstate agreement for operation of these services. Such an agreement will, in addition to making possible future upgrades to the service, give West Virginians a voice in the Maryland Transportation Administration’s discussions concerning the line.

But there is a problem. The Governor’s recommended budget for 2015 contained no appropriations for the fund established by the Commuter Rail Access Act. Without funding, the interstate agreement demanded by the act cannot be signed. Maryland Transportation Authority officials have repeatedly stated that no agreement can be made without regular funding from West Virginia. No agreement means that the current status quo will persist, an unacceptable outcome for West Virginians.

NARP agrees that more must be done. As believers in balanced transportation, we believe that all modes- road, air, and rail, deserve public investment and support. We also believe that no state should consider its own portion of the transportation network independently of other states. A truly national network requires interstate cooperation to ensure consistent investment and guarantee adequate capacity. That’s why we’ve written a letter to Governor Earl Ray Tomblin expressing our concerns and requesting that he honor the legislature’s commitment to fund West Virginia’s contribution.

You can help us! We know that, in principle, the Governor believes that commuter rail is an important part of a balanced transportation network. Let’s remind him of the commitment he made. Give his office a call (304-558-2000 or 1-888-438-2731) and talk up these points:

1. Interstate cooperation agreements are key to the development of large-scale regional transportation projects. By honoring its commitment, West Virginia will demonstrate that it is a reliable partner in improving transportation infrastructure.

3. The Brunswick Line’s ridership has substantially increased over the past few years. Increased state investment in the line will bode well for future investment in passenger rail elsewhere in the state.

We know that there’s political support. West Virginians, like other Americans, want more transportation choices. Honoring the state’s commitment to funding the Brunswick Line and creating an interstate agreement is an important step towards building the balanced transportation network the region needs and deserves.