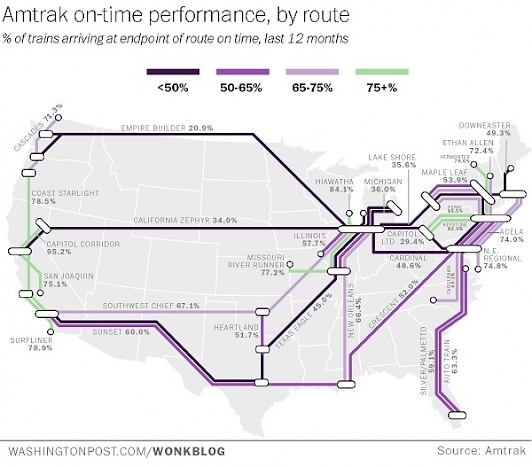 With 2013 came the highest intercity passenger train ridership in the United States since the creation of Amtrak, despite the system being beset by incredible delays. On the Washington Post Blog yesterday, Christopher Ingraham put forth a solution for Amtrak’s on time performance: simply cancel the trains that don’t run on time.

Employing this logic, we should therefore tear up stretches of freeway that become too congested and cause delays. We should simply dismantle the air traffic control system that has recently delivered only a slightly higher average on time performance than Amtrak, as pointed out in the same post.

Of course, that’s a knee-jerk reaction.As far as a diagnosis of the on-time-performance quandary, Mr. Ingraham is almost on point, citing old infrastructure and byzantine regulations. He does fail to note that on time performance became noticeably worse after the 2013 D.C. Court of Appeals ruling, which is part of the impetus for the Supreme Court review of the matter.

The piece overall is defined by a consistent misrepresentation of fact. The stinging, opening quote, for instance:

"’Amtrak is a heavily-subsidized rail service with Russian quality at Swiss prices. It is the shame of the developed world.’ As it turns out, he was being a little too generous.”

Strong words, certainly, but completely exaggerated when confronted with the very strong 88% cost recoverythat Amtrak boasted in FY 2013. This means that only 12% of Amtrak’s operational costs were subsidized, which is extremely favorable to every other domestic mass transit system, not to mention the abysmal 51% cost recovery that the broken financing model for our highway system is producing. So, it begs the question: if Amtrak can be considered “heavily subsidized,” what superlative could adequately encompass the evidently egregious amount of subsidy that other elements of our transportation system consume?

It should be noted at this point that Mr. Ingraham is a data journalist. This is perhaps why he makes the incredible suggestion that the trains most impacted by the recent delays, almost exclusively in the long distance sector, should simply be eliminated. Sure, from the perspective of a spreadsheet, this would make the system’s on-time-performance average look better. The problem of course is that we’re not dealing with spreadsheets; small town economies and millions of people across the country would be adversely affected by this incredibly prescriptive approach. Amazingly, in the same paragraph he says something that is somewhat factual:

“There is literally no reason to take the train from Chicago to Seattle other than for the romance of being on a cross-country train.”

This is reflected in that little over 10% of the well over 500,000 people every year who travel aboard the Empire Builder take it from endpoint to endpoint, Seattle to Chicago. However, from this he concludes:

“There's no reason to keep pouring money into what amounts to a purely recreational transit option.”

If Mr. Ingraham had bothered to look at the data, he would find that the majority of passengers aboard theEmpire Builder use it to get to places in Minnesota, Wisconsin, Montana, and Idaho. In this so-called flyover country, the Empire Builder continues to boast impressive ridership for a single daily train service that is operating so unreliably. One will find that similar usage patterns exist on every long distance service Amtrak operates. Perhaps this is because transportation options for rural places are diminishing, most notably in dwindling air service – not to mention the potential critical importance these services represent, given the uncertain future the Federal Highway Trust Fund.

For so many underrepresented parts of the population, writing off these long-haul trains is evidence of a dangerous kind of metropolitan provincialism, and is patently irresponsible. The long distance segment alone has grown by 55% since 1997, which should inspire the impetus to improve the national network by working with the freight railroads to expand capacity of the infrastructure, not to abandon it entirely!