Viewliner II: An End in Sight

According to a presentation given today at the monthly Washington IEEE luncheon, Amtrak expects delivery of the 1st of 25 new CAF Viewliner sleeping cars next week, after having completed delivery of the first Baggage-Dormitory car, 70 baggage cars, and 24 out of 25 Dining cars that replaced equipment that had been rolling since the middle of the 20th century. 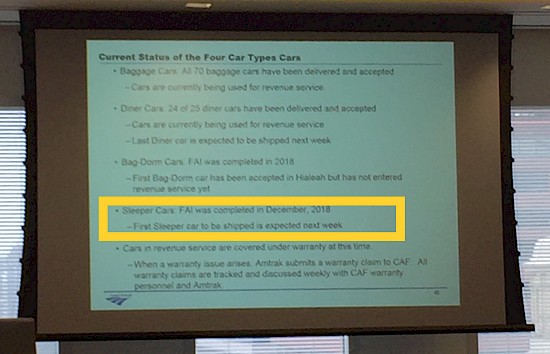 The 25 sleepers, after testing and full delivery, are intended to augment the existing Viewliner fleet of 50, given its relatively “young” age of less than a quarter century in revenue service. Apart from otherwise improved amenities from the new diners and inclusion of versatile bike racks in the baggage cars, this represents the first expansion of passenger capacity seen from the order.

Apart from the “new car” smell, the other noticeable difference with the new Viewliner sleepers will be the absence of toilets in roomettes, bringing the service in line with Western accommodations found on Superliner trains. The consumer satisfaction indicators resulting from the change will no doubt be interesting to review.

The new car is set to undergo installment of some final touches by Amtrak, including the installation of wifi after its delivery to Hialeah yard in Miami before road testing. It may see revenue service before the end of the year, and that couldn’t be soon enough.

There isn't a place in the system where added sleeper capacity wouldn't be felt. Rooms on the Cardinal are perpetually hard to book less than a month in advance, rooms on the Crescent charge enough to indicate plenty of latent demand, to say nothing of the overnight trains that don’t offer the amenity at all.

This delivery will mark the beginning of the end of a decade-long process with Spanish Manufacturer CAF. There will be reams of information and implications of why the procurement of 125 railcars took as long as it did. The half serious joke has been that CAF can build transit vehicles, but got overwhelmed when faced with putting bathrooms, showers, and kitchens on them.

Joking aside, the lessons learned from the process will be numerous. However, we can make a solid observation without getting too far into the weeds: this project, alongside the failed Nippon Sharyo bi-level order for state services in the Midwest, had something fundamental in common. These are two recent projects that were one-time orders and required establishing an assembly line, with no clearly established pipeline of equipment orders to sustain the backing of corporate leadership headquartered abroad. This clearly doesn’t work.

We need a steady supply of new equipment supplementing the fleet. It will take 929 pieces of equipment to replace all of Amtrak’s fleet that is more than 37 years old, which doesn't touch on what would be required to add service and expand the network. For this we need stable equipment suppliers. To support them, like so much else, we need ongoing, reliable, dedicated funding for passenger rail services in this country that agencies can plan around.

Arriving alongside this long awaited sleeping car is yet another issue that the next Amtrak reauthorization desperately needs to address.