Intercity railroads have always been about property development. This is the reason why historic downtown cores across the nation are usually within remarkably close proximity to train stations. This has held true for towns and cities of all sizes. Earlier this year, Washington D.C. and the mess of stakeholders involved with its secular cathedral also known as Union Station unveiled a plan to expand the passenger concourse in a transformative move by developing the air rights above the tracks, therefore seamlessly introducing a massive and grandiose segue between five neighborhoods where there is now a rail yard and a looming pair of retaining walls. This is a scintillatingly retro-progressive move, given that similar proposals, manifesting as Grand Central and Penn Stations, transformed the city of New York a little over a century ago. 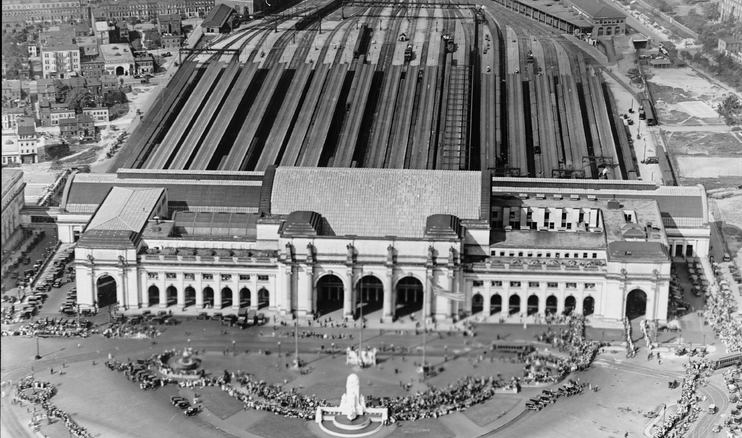 Of course, those projects didn’t face the bought and sold realities of modern American urban environments. The very idea that a complex like the original Penn Station could have been the sole property and drive of one massive corporation seems almost beyond comprehension today. There are an almost ludicrous number of stakeholders involved in the Washington project, and it was this multifaceted reality that brought a handful of them together under the gilt umbrella of the National Trust for Historic Preservation last night for an overview of their massive and visionary plans. 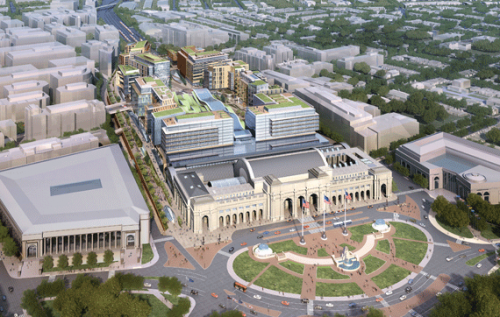 Beverly Swaim-Staley of the Union Station Redevelopment Corporation emphasized how the project is increasingly being viewed as the most important (of many) economic development projects in the District of Columbia. The projected 8 billion dollars to be spent over the next thirty years would allow for growth at the currently crowded station, as well as weave together the five currently disparate neighborhoods surrounding the complex in a meaningful way. Striking comparisons abounded, the most vivid equating one MARC commuter train with three 747 airplanes. Perhaps most interestingly, she mentioned engagement in the other major station redevelopment projects around the country, which are more and more plentiful.

Brian Harner, an Architecture Consultant for Amtrak also shed much light on the scope of the project thanks to a glimpse into his international review of large rail stations abroad. Take, for example, St. Pancras station in London. It serves roughly 167,000 passengers per day with 15 tracks. D.C.’s Union Station serves less than one third of that (57,000 passengers daily) with 20 tracks. Much of the issue is tied to crowd flow, which is currently abysmal. Even though Union Station is currently at two thirds of it’s original maximum capacity, thanks to a mall occupying the former cavernous passenger concourse, it is impossible to imagine increased usage of the space. Without a change in space utilization (Swaim-Staley had informed us that the current owners are enjoying the rest of what is a more than 70 year lease), the station can be considered completely at capacity.

Finally, David Tuchmann of Akridge development spoke of the potential waiting above the train tracks—all 3,000,000 square feet of it. The proposed design is impressively holistic, allowing for more than five acres of open space in the middle of the development, and a porous, pedestrian-friendly emphasis surrounding what is now the impervious train yard. While the original Union Station restoration and redevelopment has done wonders for much of Near Northeast D.C., there is still an incredible amount of potential for further enrichment of the site over the next several decades, and it’s all over the tracks.

We here at NARP often find ourselves deflecting accusations that we are biased towards development and activity on the Northeast Corridor. This project, if and when completed, will have consumed the equivalent of the entire high speed rail fund allocated in the first stimulus package. However, to focus on that aspect of this mammoth undertaking would be to miss the point. We must instead look at the kinds of coalitions being formed—the collaboration between cities sharing best practices to revitalize their historic cores. It must be more than symbolic that the event was held at the National Trust, which is so often present in revitalizing rural communities. It also must matter that on the same day as the collaborative presentation, Amtrak unveiled its newly improved Great American Stations website, which is a tool for communities nationwide interested in restoring their stations to their rightful place of prominence in the town center. Finally, a showcase of the unique developmental capacity inherent to train stations near where so many of the country’s decision makers work would surely have more than a mere subliminal impact.