Every passenger must STAND UP for trains—there are no sidelines now!

The White House released its “skinny budget”—a general budget outline with few programmatic details—early this morning. And while infrastructure investment has been a major theme of President Trump’s campaign and first 100 days, his administration’s first budget guts infrastructure spending, slashing $2.4 billion from transportation. This will jeopardize mobility for millions of Americans and endanger tens of thousands of American jobs.

Every passenger must STAND up for trains—there are no sidelines now!

The budget appears to be modeled on an outline produced by the ultra-conservative Heritage Foundation. Cuts include:

NARP is asking every Amtrak, subway, and commuter rail passenger to speak out today!

It’s up to Congress to turn this proposal into a real budget. Members of Congress look to see which cuts produce the most pushback from advocacy groups, local officials, and members of the public to gauge where cuts can be made. If we stay silent, these cuts will be enacted into law!

Even an email will take too long. Call now!

Read the full NARP Press Release on the proposed cuts! 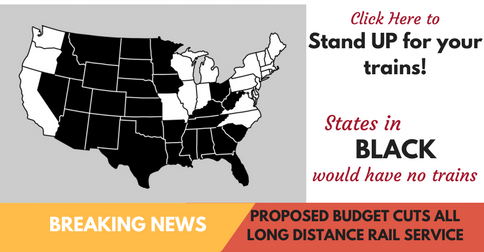