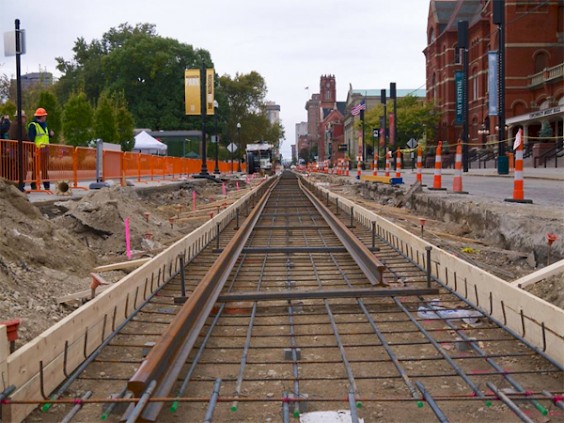 With a crucial decision looming for the Cincinnati streetcar project, local advocacy groups are uniting to demonstrate public support for the transformational project.

Believe in Cincinnati, in conjunction with the Cincinnati Streetcar, is organizing a city-wide petition campaign to harness the wave of public support for the line:

We've been truly inspired this week with the passion and the heart driving people to get signatures. Your dedication has not gone unnoticed. As we've been telling you all week, it's not even work when it's something you believe in. You all make it that much easier. That same passion that drives you drives us.
Thank you for all your hard work. Let that passion drive you through this week. We will make this happen!

If you’re looking to connect, Believe in Cincinnati is hosting updates on its website. And now, WCPO Cincinnati is reporting that the campaign may be having an effect:

In what may signal a break in the impasse about continuing Cincinnati’s streetcar project, six City Council members sent a letter Monday to federal transit officials.

The letter stated, “For the first time since the new mayor and council were sworn in earlier this month, we are beginning to see a viable path forward to complete construction on this first phase of the project.”

“Public and private sector leaders are actively collaborating to explore a number of channels through which to make the streetcar’s annual operating expenses manageable,” the letter continued.

The letter was sent to Peter Rogoff, head of the Federal Transit Administration (FTA).

You can read more on WCPO’s website. But make sure to speak up and let your voice heard. Contact Mayor Cranley and let him know you support the streetcar!