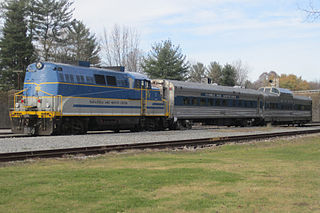 The Saratoga and North Creek is another Iowa Pacific-owned company that provides semi-regular passenger service. Trains like this one will soon serve Oklahoma City and Tulsa. Photo credit to Peter Flass via Wikimedia.

Since the introduction of Amtrak’s Heartland Flyer in 1999, Oklahomans have once again seen the benefits of passenger rail service as a fast, relaxing mode of transportation. Rather than having to contend with frequent traffic jams and other congestion on Interstate 35, residents of Oklahoma City, Norman, Ardmore, and other towns can comfortably speed to Fort Worth. And, once they arrive at Fort Worth, passengers can then transfer to Amtrak’s Texas Eagle and continue to points east and west on the train’s route between Chicago, San Antonio, and Los Angeles.

While the Flyer has proven extremely popular with passengers, the service does not help those Oklahomans living outside of the I-35 corridor. Residents of Tulsa, the state’s second largest city, have lamented their exclusion and have supported calls for restored passenger train service. Oklahoma’s Department of Transportation has taken note of these appeals, and has conducted studies about state-supported passenger rail service between Tulsa and Oklahoma City. Unfortunately, perennial state budget woes and dwindling federal support, combined with high upfront capital costs, made most policymakers dismiss the train as impractical in the current economic environment.

That is, of course, until Ed Ellis entered the picture. As the President of Iowa Pacific Holdings, a major operator of short line railroads throughout the country, Ellis has maximized the potential of lines that have been typically neglected and ignored by larger railroads. Building on this experience, Ellis has offered a bold vision for privately-operated passenger rail in Oklahoma with the Eastern Flyer. By 2016, Iowa Pacific believes that it will be able operate no less than eight trains a day connecting Oklahoma City, Tulsa, and intermediate communities without any direct state support.

Our readers may look askance at Ellis’s claim, and rightly so. How can he believe that he will operate the service without public assistance, when almost every other intercity passenger rail system in the world requires such support. To some extent, Iowa Pacific’s venture benefits from public aid. It does not pay for use of the tracks, which are owned by the state government. The state does not assess Iowa Pacific fees for running the trains, and in return, the railroad does not demand a direct state subsidy.

Furthermore, the company contends that a combination of changing attitudes towards transportation as well as existing demand have created a strong customer base. As stated earlier, Oklahomans have long recognized the benefits of passenger rail and have expressed support for its expansion. But what’s more important here is, as we’ve reported to you, the slow but steady end of Americans’ love affair with the personal automobile. Rising fuel prices, congested highways, and a rejection of suburban means that Americans are seeking alternatives to auto dependence.

By capitalizing on this desire, Iowa Pacific believes that it can offer multiple levels of service to appeal to different customer bases. Coach fares starting at $15 will make the service attractive to a wide variety of passengers, while the availability of first-class accommodations starting at $39 appeals to those seeking a unique travel experience. Additionally, for an extra $6, passengers will be able to add shuttle bus services that will bring them to the trains without the need to drive. In offering a wide variety of these “value-added services”, including full-service dining cars, Iowa Pacific believes that it will profitably operate the trains while guaranteeing their utility to the larger community.

So far, Oklahomans appear excited about the Eastern Flyer. Each of this month’s six demonstration runs between Sapulpa and Oklahoma CIty have sold out entirely, beating Iowa Pacific’s own projections. Emboldened by the trains’ popularity, Ellis vowed to begin regular service on the route by Memorial Day weekend and expressed confidence that the traveling public would flock to the services.

What can rail advocates learn from this case? First, we should state that, no matter the success of the Eastern Flyer, or Florida East Coast’s All Aboard Florida between Orlando and Miami, private passenger rail operationsare no substitute for a publicly-supported, robust national network. The long-distance trains that are a vital lifeline to hundreds of rural communities throughout the country cannot be operated without substantial federal operating support. NARP has long maintained that continued federal support of Amtrak must be a cornerstone of federal transportation policy, and we will continue to defend the railroad against baseless congressional criticism.

But what services like the Eastern Flyer *can* do is expand and complement the national network. Travelers from eastern Oklahoma will be able to connect to the Heartland Flyer in Oklahoma City, creating more opportunities for trip pairs across the national network. As we have long maintained, America’s passenger trains should not be considered in isolation from each other. Rather, each works together in different ways to create any number of trip combinations across the country. Combine Amtrak’s services with connecting commuter rail, and one finds even more possible trips. Thus, instead of competing with Amtrak, the Eastern Flyer gives more travelers the opportunity to use Amtrak’s trains for long-distance journeys, supporting the larger national network and allowing more travelers to take advantage of it.

Rail advocates should take heart in the Eastern Flyer’s early success. While it and other private passenger rail operations cannot replace Amtrak’s national operations, they will nevertheless build up the larger network of modern passenger trains that the Nation desperately needs. More trains, whether privately or publicly run, mean more transportation choices for more Americans in more cities.

That’s something we can all get behind.