Train on unusual route should spur desire for expanded service

EDIT: I apologize for having incorrectly stated that Pennsylvania Railroad's Broadway Limited stopped at 30th Street Station during its run; I've corrected the text accordingly. Thanks to Bill Magee for pointing out the error. -Colin Leach

As many of our readers will remember, we reported to you back in September about Amtrak’s first special excursion in over 20 years, theAutumn Express. Several of NARP’s Washington staff, including Ross Capon, Malcolm Kenton, Abe Zumwalt, and myself, travelled to Philadelphia this past weekend to take part in this portentous occasion for the railroad. 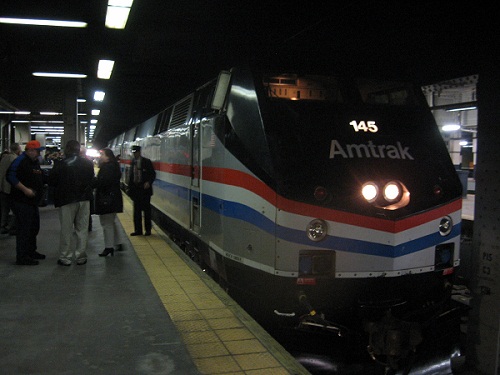 From the moment we went to board, we could see and feel the riders’ enthusiasm. Demand was so high that, in addition to creating a second excursion on Sunday, Amtrak added even more cars to Saturday’s train. The consist was so long, in fact, that the cars stretched from one end of the platform to the other; something that 30th Street Station hasn’t seen since the glory days of the Pennsylvania Railroad’sCongressionals. Of course, if more and more Americans keep taking to the rails, maybe sixteen-car trains will become a common sight.

More importantly, we could just sense the overall excitement. Veteran riders, many of whom once worked the lines we would be travelling, and new riders who had never been on Amtrak all eagerly awaited the fall foliage and the rare mileage (track that doesn’t normally host passenger trains). This, more than anything else, was the most intriguing part of the trip. Typically, excursions like these attract only a very dedicated group of train enthusiasts, either those with interest in the history of the excursion’s route or in the railroad operating it. But here, there was incredible diversity among the riders. People of all ages and backgrounds climbed aboard: novice photographers searching for photo opportunities, young families taking their children on a day trip, senior citizens taking a relaxing “land cruise”, and of course, railfans reliving the glory days.

The enthusiasm of Amtrak’s employees was remarkable. From organizing and publicizing the trip to distributing boxed lunches on board, the men and women of Amtrak did a fantastic job running the excursion. And their excitement was palpable; like everyone else, they were excited to be on board the first of hopefully many excursions giving passengers the opportunity to see parts of America’s railroad network normally off limits to passengers. This diversity made real something that we’ve known, and that our fellow rail advocates have long known too: trains are for everyone. We had the opportunity to speak with many of the passengers and find out about their attitudes towards rail. Some, of course, were frequent Amtrak riders who were ecstatic about the chance to take this special train. But many others were new to the passenger rail experience, and had never before taken an Amtrak train. When we asked them about why they had not taken trains before, we found there was one common theme throughout the responses. It wasn’t that they didn’t like trains or thought they weren’t useful: rather, it was because they lived in a place where the trains didn’t stop. Or, if they did live at an Amtrak stop, they lived at one served by one train at a very inconvenient time.

The Autumn Express passed through many communities were the trains no longer stop. Towns like Port Deposit, Maryland and Columbia, Pennsylvania haven’t been served by passenger trains in decades. Yet many of the towns’ residents lined the streets to watch the train pass, waving to passengers. As we waved back, I mentioned to Abe and Malcolm: “Do you think some of them might think that Amtrak runs through here now?” We agreed that many of them might think just that- but, after going to the website, they would be disappointed to find that Amtrak doesn’t stop there.

Perhaps that’ll be one effect of the Autumn Express and future “rare mileage” excursions—to eventually shrink the amount of track that passenger trains don’t regularly serve. While it was certainly a fantastic trip through a very picturesque part of the world, it might be that the attention it attracted from local residents will matter more. After having seen the Express roll past through the fall colors, the flickers of rail advocacy might begin to burn in these communities. Maybe in a few years, then, an Autumn Express on the same route will have to share the tracks with daily Amtrak services. Crossing the Susquehanna River on the Rockville Bridge between Summerdale and Harrisburg, PA. While this is part of the Pennsylvanian's regular route, the Autumn Express stopped atop this bridge for 5 minutes for photos. Photo by Ross Capon. Crossing the Susquehanna on the Shocks Mill Bridge, 8 miles northeast of York, PA. The middle section was rebuilt in 1972 after being destroyed by Hurricane Agnes.