“There Are Three Kinds of Lies: Lies, Damn Lies, and Statistics"

The people who fuss and fume because passenger rail in the U.S. is subsidized will acknowledge (if pressed) that all public transportation is subsidized. And they will also concede, albeit grudgingly, that the roughly $1.5 billion that Amtrak gets every year from the federal government is a tiny fraction of one percent of the annual budget.

But oh how they love to point out that the subsidy Amtrak gets, when figured on a per-passenger basis, is more than it is for an airline passenger or for someone taking a trip in the family car. 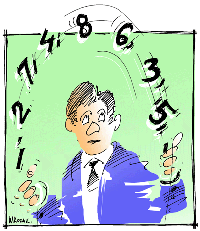 We hear all sorts of numbers thrown around about the “cost per passenger” but, as a knowledgeable member of the NARP* board observes, we can’t even agree on how to count passengers, let alone come to a consensus on what it actually costs to transport someone from Point A to Point B.

For instance, let’s say you’re a big baseball fan living in Milwaukee and you’re planning a 523-mile train trip to Kansas City to see the Brewers play a three-game series with the Royals. You think of it as one trip, of course, but because you have to change trains in Chicago, the statistician counts you as two people: Passenger No. 1 rode the Hiawatha from Milwaukee to Chicago; passenger No. 2 took the Southwest Chief from Chicago to Kansas City.

Here’s the flip side of that: let’s say that I’m taking the California Zephyr from Chicago to Denver for a conference. That’s more than 1000 miles. But it’s one train and, therefore, one passenger is added to the grand total.

See? You travel 500 miles to the baseball games; I travel twice that distance to the meeting. But you’re counted as two passengers and I’m counted as one.

Now consider this: If there are legitimate differences of opinion and inconsistencies about how to count the passengers, imagine the arguments we would have trying to compute how much it costs Amtrak to take you to those ballgames!

So let’s just short-cut the whole argument by saying what we know to be true: that there are millions of Americans in thousands of towns and small cities for whom Amtrak is the only available public transportation. And it is NARP’s contention that access to public transportation and the mobility it provides is a fundamental right of every American.