The Trans-Siberian Railway and BAM: Not as Alien as One Might Think

In a truly all-encompassing dialogue on train travel, one way or another the conversation is sure to pass by the Trans-Siberian Railway. This is because it is, with its 5,772-mile span, the longest railroad in the world, spanning over seven time zones. It is also considered one of the most beautiful train routes in the world, going places where most people have never set foot. It is, in essence, a legend, shaking stories out of every joint in the track—like the time that David Bowie secretly took the train from Vladivostok to Moscow in 1973 during the Cold War. At that time, this was illegal and almost impossible. .

Historically, the route for the Trans-Siberian Railway had already been proposed in the mid-19th century. Then Emperor Alexander III stated that he had heard enough and it was finally time to start.

“I have read many reports of the governors-general of Siberia and must own with grief, and share that until now the Government has done scarcely anything toward satisfying the needs of this rich, but neglected country! It is time, high time!” said Alexander III in his hand-written authorization.

Still, the construction took time and was hindered by numerous obstacles before all sections from Moscow to Vladivostok were finally linked in 1916. According to the Encyclopedia Britannica, that year was a turning point in Siberia’s history because it opened new areas for exploration, settlement and industrialization. Before that, Siberia was one of the most isolated places in the world. Unfortunately, with the rise of the Soviet Union, Vladivostok became a closed city to foreigners and it became highly difficult to visit the Soviet Union in general, not to mention travelling on the Trans-Siberian Railway.

There were many reasons why the electrification process started in the Milwaukee Road. For example, coal created smoke in the train tunnels that was inconvenient for the customers, coal itself was expensive and electrification, on the other hand, promised more reliable train service with more effective use of resources. Moreover, steam power performed disappointingly in the mountain areas during the winter.

Milwaukee Road started the electrification process in 1909 and finished it in 1929, making Seattle the largest city on the longest electrified line in the world. This historical electrification was a widely discussed topic in professional literature because it was assumed that the Milwaukee Road would fail in its efforts of electrification.Instead it proved the robust efficiency of electrified propulsion, even in treacherous and rural terrain. Thus, it is quite probable that Russian scientists took note of that. Furthermore, because of the similarity of the challenges that the electrification process faced in Russia and Milwaukee Road– like cold winters and rugged scenery – it is safe to say that American ingenuity has left its mark on the rich history of the Trans-Siberian Railroad.

When talking about the Trans-Siberian railway, train fans often forget that there are several other exciting railway routes in the neighborhood. One of the longest of them is the Baikal–Amur Mainline (BAM) (2,687 miles) that runs parallel to the Trans-Siberian Railway. This route leads adventurous travelers all the way to the Russian Far East, which is one of the least occupied places in the world. 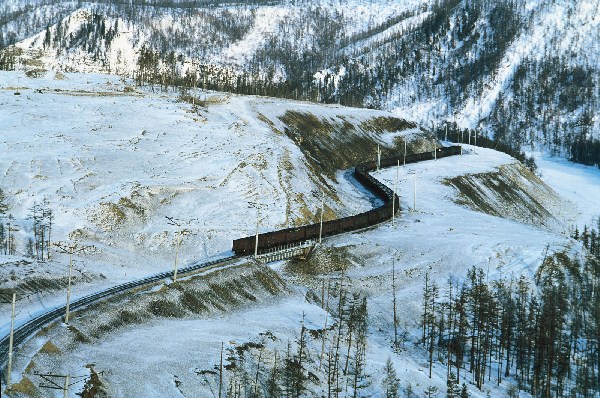 However, it’s not all about tourism. For many people living in the Siberia’s isolated villages, the railroad is the only form of transportation and even medical care. For Americans, it may come as a surprise that thousands of Americans use long distance trains for the same purpose. Interestingly, one of the icons of the BAM is a mobile medical clinic called Matvei Mudrov that consists of about 15 doctors and basic medical equipment. For the many small and almost abandoned communities along the route, the medical train is one of the few points of contacts with civilization that the local people have. For the people in this region, trains are by far the most reliable means of transportation, much like the kind of service Amtrak’s network trains provide in Winter.

Furthermore, the construction of BAM is as long and interesting as the Trans-Siberian route. However, BAM was built almost solely by the Soviet Union and preliminary plans were made during the 1930s. Stalin wanted to make the route more to the north because he was worried about the Trans-Siberian railway’s proximity with China, and he needed access to the resource-rich and uninhabited Siberia. Stalin started secretly building the railway with the prisoners of Russian forced labor camps in a system called Gulag, but the project was delayed when Stalin died in 1953. In the 1970s, the new Soviet leader Leonid Brezhnev started with this project again, calling it the “project of the century.” It was hindered by engineering difficulties due to permafrost and the need for numerous new tunnels. Thus it was not until 1991 that the project was declared complete.

For those with wanderlust: Now that the Iron Curtain has long fallen, the Soviet Union has been dismantled and we do not have to sneak to Russia as David Bowie once did. The Trans-Siberian Railway and BAM are open to all passengers, and there are only two complications in the way: time-consuming Russian visa procedures and money. Nowadays, numerous travel agencies offer packages for the route, and some of them, like Transsiberian Travel, deal exclusively with tours on the Trans-Siberian Railway, while BaikalComplex offers tours on the BAM. According to Budget Travel, the train fees itself are at least $1,500 – that is when you buy tickets yourself. On the other hand, when looking at the reviews from TripAdvisor, the average cost for a lower-end two-week trip that includes hotels and guides is about $6,000 for the Trans-Siberian Railway. Still, it is possible that you’ll end up paying thousands of dollars per day. Nevertheless, if you have the money and the time, it is surely one of those trips that you will never forget.