ABC 11 WTVD, a TV station serving North Carolina’s Triangle region (Raleigh-Durham-Chapel Hill), ran an “I Team Investigates” report last night about what the State of North Carolina is paying for the Piedmont and Carolinian “taxpayer trains,” which together offer three daily round-trips between Raleigh and Charlotte, serving the state’s biggest population centers. The story focuses too much on what revenue the trains generate, not on the benefits of the service, and avoids comparison to other modes of transportation, which are even more heavily subsidized.

NARP member Edward S. Stone of Roanoke, VA, argues this point very well in an Aug. 6 letter to the editor of the Roanoke Times: “Taxpayer [train] … falls so sweetly upon the ears that it suggests other naming possibilities. Interstate 81, for example, could very appropriately be named the Taxpayer Turnpike. The main building at the Roanoke Regional Airport would have a much stronger identity if it were called the Taxpayer Terminal.”

Trains are a relative bargain 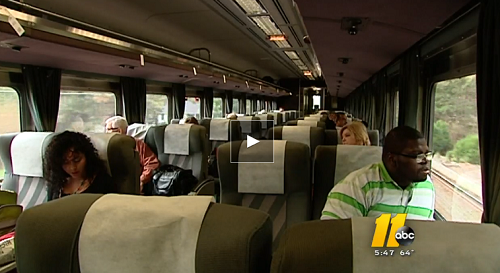 Reporter Steve Daniels starts the segment by showing a “practically empty train” running between Raleigh and Durham. The “I Team” could just as easily have filmed a lightly-traveled stretch of Interstate highway early on a Sunday morning, or gone to Raleigh-Durham International Airport in the middle of a lightly-traveled weekday. Both the highway and the airport are alsosubsidized by state taxpayers—and the highway (unless it’s North Carolina’s only toll road) does not take in any direct revenue. Yet new road projects proceed apace with hardly any reporters questioning their value to taxpayers—from 2004 to 2008, North Carolina spent 63% of its highway capital funds on road expansion, with only 10% going to repair and maintain existing roads. The $7.4 million it cost the state to run the Piedmonts in fiscal 2012 is only two-tenths of one percent of the NC Dept. of Transportation’s $4 billion annual budget. For carrying an average of 438 passengers every day in 2012 (up from only 184 passengers per day four years ago), we’d call that a bargain.

A robust, safe, functioning transportation system that offers choices to travelers is part of the underpinnings of economic activity, and is something that we citizens pay for together through our taxes so that we can derive a variety of benefits, both from the transportation system itself and from the thriving economy that it makes possible. Even someone who doesn’t ride the Piedmont or Carolinian may benefit from the services of a company whose employees use the train to get to their jobs, or from shopping at a store located near the train station that has enough customers to survive because the train brings them to town. If ABC 11 had run a story that implied that highways and airports should be turning profits, the station would have been widely ridiculed for its would-be neglect of economic realities. Why does so much of the media hold passenger trains to a different standard?

Notice that Mr. Daniels was unable to find a passenger to interview who would speak negatively about how much the train costs. Several even told him they would be willing to pay higher fares for the service! This also misses the point. Incomments on WTVD’s Facebook page, hardly anyone expressed concern about the trains’ cost to taxpayers. The majority either said they ride the train and love having that choice, or said they would ride the train if fares were lower or if it were more convenient (if there were more frequent service, offering a better range of departure times, or if connecting transit was better at their destination). This feedback is a better representation of public opinion than the skeptical bent that WTVD’s reporting takes.

NCDOT Rail Division chief Paul Worley said it well: “It has been an investment by the North Carolina DOT as we try to provide a multi-modal transportation system.” NARP member Edward S. Stone of Roanoke, VA argues the same point well in. States like North Carolina and the federal government invest public money in passenger trains to provide service and choices to the citizens who pay for it. And if both states and the federal government would increase their investment, then even more Americans would ride trains because they would have more departure times to choose from, more destinations that can be reached, and more robust transit networks to take them from the train station to their final destination—and there would be a range of fares so that more could afford to ride. But as long as the balance of public funding for transportation is tipped towards highways and air, these will seem to be the cheaper and more convenient ways to go.

Finally, as we see it, adding lanes to highways largely serves to increase congestion over time as more drivers are attracted to these highways. But adding capacity to trains gives more people the ability to avoid highway congestion while having a salutary effect on that congestion. More intercity train ridership in turn encourages better connecting transit service in the communities where the trains stop, and incentivizes developers to build denser, more walkable communities around train stations rather than building more spread-out, car-dependent subdivisions farther out into the countryside. Running more buses instead of trains would be cheaper only on a short-term horizon, as buses offer less capacity and must be replaced more often. There is certainly an advantage because the highways are already subsidized, but ultimately the buses would attract far fewer riders because a train simply offers a more desirable travel experience than a bus—and buses do not compete with cars, as they get caught in the very same traffic.

Time for a reality check

As our eloquent Chairman Emeritus, George Chilson, put it: “Road projects are never subjected to any sort of financial analysis. It’s simple; they don’t generate any revenue. With the exception of a few toll facilities, roads are a free service provided by government at taxpayer expense. When government builds a road, it signs on to paying its operating costs as well. The decision to dedicate (a.k.a. “earmark”) an enormous and continuing stream of tax revenue for road construction has made it possible for road projects to proceed unquestioned on the basis of their assumed ability to improve public mobility.

“Today, a dollar spent on rail will provide more capacity and potentially higher quality mobility than the same dollar spent on roads. So why do we buy into this double standard that hobbles investment in rail? Train advocates should set a single goal: change the outmoded public spending policies Congress and states adopted nearly a century ago in order to bring them in line with current needs and public preferences. That’s rail (in all its forms, from streetcars to high-speed trains) not roads.”