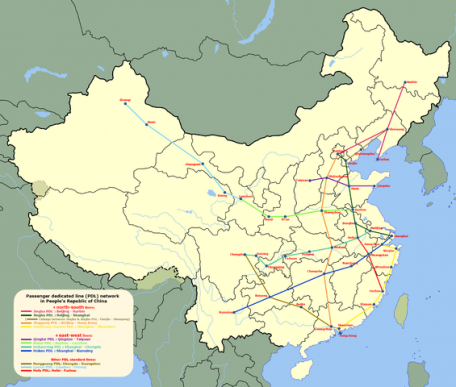 Next time you feel frustrated while stranded in an airport—an all too common experience these days—pull up this Los Angeles Times story to help yourself feel a little better:

China's skies are in a state of almost permanent gridlock. During the month of July, only 17.8% of flights departing from Beijing's airport were on time, according to FlightStats. In August, on-time departures improved, but only to a miserable 28.8%. The U.S. website ranked Beijing worst out of 35 top international airports for punctuality, with Shanghai close behind.

The maddening delays have become a drag on the economy and the trigger for near-riots. In a nation that prides itself on social order, state media reported 26 brawls at Chinese airports between May and August. One Hong Kong airline has started teaching its flight attendants kung fu.

Flights here are delayed for pretty much the same reason highways are backed up: Explosive economic growth has produced traffic faster than infrastructure has improved.

Since 2003, the number of airline passengers in China has nearly quadrupled, to 319 million last year.

And while China’s government is struggling to identify a politically viable solution to their airport mess, massive government investment has led to great strides in the reach and efficiency of the passenger rail system. With $98 billion invested in passenger trains in 2013 alone, the country will see roughly 3,400 miles of new railway lines phased into service by the conclusion of 2013. That brings the total size of China’s rail system to 64,000 miles—of which an astounding 6,200 miles will feature high-speed operations.

As Business Week explained in August, the conjunction of airspace gridlock and rail has made modal selection a no-brainer for the passengers who actually have an option:

The 3 1/2-hour ride on the high-speed rail between Changsha in central China and Shenzhen in the south is never late and allows phone calls unlike on a plane, she said. “Now that we have the bullet train, who will take flights?” said Liu, 50, who owns a property investment company and travels eight to 10 times a year between the cities.

Frequent fliers like Liu migrating to high-speed rail are a drag on earnings at Chinese carriers already faced with lower fares and overcapacity. Travelers in China, where one quarter of flights depart late, are also flocking to bullet trains after the opening of a new line between Beijing in the north and Guangzhou in the south that connects 28 cities along the way.

“What is really killing the airlines is flight delays,” said Andrew Orchard, an analyst at CIMB Group Holdings Bhd. (CIMB) in Hong Kong. High-speed rail has become a major competitor for airlines given the greater frequency of trains, he said.

Under a plan unveiled in 2008, China aims to have a high-speed train system comprising four north-to-south and four east-to-west lines covering 90 percent of the population by 2020. The east-west networks are under construction, while Beijing-Guangzhou is one of three north-south lines in operation.

So while American travelers can feel thankful that they don’t share the plight of their Chinese counterparts, you have to wonder for how long that will be the case. Unless the U.S. can address its anemic levels of investment in infrastructure—specifically passenger rail infrastructure, where it lags far behind the rest of the developed world—it could be American passengers that finds themselves left at the station.