The Olympics Ride the Rails 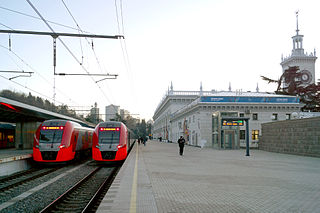 Whether in their summer or winter variations, hosting the Olympics give national and local governments an opportunity to showcase the best they have to offer—not just in athletics, but also in the supporting transportation infrastructure. What good, after all, is building an Olympic Village, complete with new stadiums, if there’s no way to get there? That’s why in most Olympics over the past few decades, all levels of government have partnered to provide increased infrastructure. Salt Lake City’s winning bid for the 2002 Winter Olympics was the catalyst for the construction of the city’s TRAX light rail system, now a fixture of the local transportation network. In London, the 2012 summer games spurred further investment in the city’s already well developed transportation infrastructure, including expanded suburban rail services and new high speed services between London and southeast England. In advance of hosting the games in 2016, the Brazilian government has committed billions to the construction of a new light rail network in Rio de Janeiro. Consisting of six lines covering 32 miles of track, the system will go a long way towards alleviating the city’s present dependence on cars and buses.

As might be expected, the ongoing Winter Olympics in Sochi, Russia has also spurred a massive investment in transportation. Located on the Black Sea, Sochi is more than 1,000 miles away from Moscow, and nearly 1,500 miles from St. Petersburg. Since many international visitors will be first arriving by plane in either Moscow or St. Petersburg, improved transportation links are vital. Within Sochi itself, improved transportation is also needed to shuttle spectators between the Olympic Village and the venues for skiing and snowboarding events, located 24 miles to the north in the village of Krasnaya Polyana.

That’s why Russian Railways has invested billions in improved rail transportation. Investments on the Moscow-Sochi railway, including the purchase of three dozen new high speed locomotives, state of the art passenger cars, and improvements to the track, have meant that travel time between the two cities has been cut from over 30 hours to 25. A much longer journey than by air, but it is nevertheless one that’s much more comfortable. With state of the art berths, Wi-Fi access, and increased access to on-board showers and toilets, the new trains represent a significant improvement in long-distance passenger transportation.

Spectators in Sochi also benefit from this increased investment. Cutting through some of the most difficult terrain on the planet, Russian Railways has rebuilt the line between Sochi and Krasnaya Polyana to allow for fast, frequent service. Previously, a trip between Sochi and Adler, the junction prior to the railway’s climb into the Caucasus, took 45 minutes. Now, even including the crossing through the mountains, the entire trip between Sochi and Krasnaya Polyana takes a little more than a half hour. With eight trips per hour in each direction, visitors can easily shuttle back and forth between the skiing venues and the main Olympic Village.

However, all of this investment would be for nought if there were no use for it after the Games were finished. This investment will be key to the region’s future. Policymakers envision that the plethora of recreational facilities, new hotel space, and improved transportation will put Sochi on the map as a year-round resort, appealing to both skiers and sunbathers. Additionally, Sochi is already scheduled to host Russia’s largest auto race through 2020, and will also host some matches for the 2018 World Cup. Hosting these events would not be possible without a robust public transportation infrastructure that can move visitors around without clogging the streets.

Like its predecessors, the Sochi games are no exception to the basic principle that balanced transportation advocates have long understood. Increased economic activity, whether in the form of typical commercial expansion or in extraordinary construction to support events like the Olympics, relies on a healthy multimodal transportation network. Most Olympic host cities have found that transportation investments made for the games have served them well long after their conclusion, creating new opportunities for economic growth and supporting goals of balanced transportation.

But why wait for an Olympics to invest in the transportation network of the future? Our nation’s mobility needs for the coming decades will not change depending on whether or not the United States hosts the games in the future. Instead, we should acknowledge that the time to build is now. We should not delay on making what we know are needed investments.

At the very least, if we invest in improved transportation today, perhaps we might bolster America’s case to host the games in the years to come.