The New Tunnel to Gotham: A Closer Examination of the Ticking Time Bomb Beneath the Hudson River 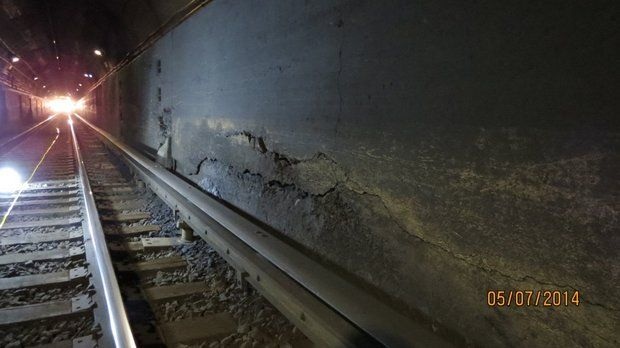 For the past hundred years, the two North River and four East River tunnels have been a vital piece in our nation’s rail infrastructure. Completed in 1910, the tunnels, which are roughly 12,000 to 13,500 feet long, transport tens of thousands of people per day to and from North Bergen, New Jersey to Pennsylvania Station in Manhattan and onwards to Queens. Commuters from throughout New Jersey and Long Island use them, as well as Amtrak passengers from New York traveling throughout the country. Built by hand, they remain an engineering achievement of the highest order and make Manhattan a little less of an island and more a part of our country.

When Super Storm Sandy hit New Jersey and New York on October 29, 2012, something happened that had never happened before. Two of the East River and both of the North River tunnels flooded. After the storm passed, inspections showed that roughly 2,300 to 4,200 feet, about a fourth to a third of the tunnel’s distances, had been flooded. The water was quickly pumped out of the tunnels and train service was restored within a few weeks after initial repairs were made.

In the aftermath of the storm, Amtrak commissioned an assessment of the total damage done to the tunnels by the storm. On October 2, 2014, the report was released by Amtrak showing that the damage was severe and that repairs to the tunnels would require them to close at least one of the tunnels to traffic in the near future. While NARP has been educating officials on the need to replace the tunnels for a decade, the report’s release has given the conversation on the future of the North and East River tunnels new urgency. In order to understand this complicated issue, we must look into what the assessment states and what our options are before deciding how to move forward with what to do.

The Structural Assessment of the Amtrak Under River Tunnels in NYC Inundated By Super Storm Sandy is a sobering document. After describing the physical characteristics of the tunnels, they clearly and vividly show how much water was in the tunnels during Super Storm Sandy. Thirteen million gallons of seawater flooded the two North River tunnels as well as two of the four East River tunnels. In the flooded East River tunnels, water reached the ceilings of the two tunnels, completely submerging them. The North River tunnels suffered less flooding, with water only reaching the level of the bench walls along the sides of the tunnel. While the water was pumped out of the tunnels in the days following the storm, deposits of chloride and sulfate remained in the concrete, setting the groundwork for further damage to the tunnel. Found in salt from seawater, the sulfates attack and weaken the concrete lining the inside of the tunnels. The chloride ions act as a catalyst to initiate the corrosion of the cast iron and reinforcing steel that is located inside the tunnel’s concrete walls.

After presenting multiple pictures and other pieces of evidence to illustrate the damage done to the tunnels by the storm, the assessment made several recommendations for what needed to be done to fix the issue. The recommendations included removing and replacing areas of damaged concrete, all electrical and mechanical systems and equipment, all bench walls and all ballast and rail in the tunnels. In addition, they recommend that the tunnels be pressure washed throughout the entire length in order to remove all chloride and sulfate deposits as well as sealing all leaks greater than 1/8 inch wide and patching any concrete holes that are greater than one inch deep.

The assessment identifies a challenging prerequisite to carrying out all of these recommendations: each tunnel must be closed in order to allow for the work to take place. Closing one of the North River tunnels for repairs would dramatically impact travel between New Jersey and New York, reducing rail capacity by seventy five percent, due to the configuration of the tunnels (the impact on travel between Long Island and Manhattan would not be as pronounced as travel between New York and New Jersey due to the presence of three other tunnels that would remain in service while the repairs are being made). During peak rush hours, 24 Amtrak and New Jersey Transit trains use each tunnel per hour, so any closures would create Amtrak delays that would be felt throughout the Northeast Corridor. The total time for the repairs was estimated at about one year for each tunnel with three shifts working 24 hours a day, seven days a week. The total repair cost is estimated to be $689 million.

A no-growth option would be to close the tunnels for repairs without constructing Amtrak’s Gateway Project, which would construct new rail tunnels under the Hudson River. While the project costs for the no-growth option would be lower, the total costs to entire New York metropolitan region are extreme. Closing one tunnel would dramatically reduce the number of trains that can pass between New York and New Jersey. NJT passengers would have to transfer at Newark Pennsylvania Station and Hoboken Terminal to the PATH trains to get to Manhattan. Commuters would be displaced to buses or cars through the Holland and Lincoln Tunnels or on the George Washington Bridge. It’s possible that closing any of the North River tunnels for repairs without a replacement tunnel to redirect traffic could be done. But as we saw in the weeks following Superstorm Sandy, it could only be done at an enormous cost to the entire region in terms of congestion, pollution and quality of life.

Another option would entail building a new rail link between New York and New Jersey and then once it was completed, taking one of the North River tunnels out of service for repairs. One way would be to extend the Seven Train of the New York City Subway into New Jersey to Secaucus Junction. Currently being extended to the West Side of Manhattan and scheduled to be completed in early 2015 as part of the Hudson Yard Redevelopment Project, this option was proposed after the ARC tunnel was canceled in 2010. If built, it would be the first time that the New York City Subway system had expanded outside the boundaries of the city and would be cheaper, roughly $5 billion, than building a new heavy inter-city railroad tunnel. However, while it would help commuters reach their jobs in the city, extending the subway would not help National Network travelers because it would not increase Northeast Corridor capacity.

According to The Amtrak Vision for the Northeast Corridor: 2012 Update Report, if funding was made available, the entire project could be completed by 2025. Unfortunately, funding has not been forthcoming for the project as Congress dithers on infrastructure investment. Despite this major issue, some parts of the project are moving forward. Roughly $2 billion in funding has already been approved for the replacement of the 100 year old Portal Bridge over the Hackensack River but construction has not yet begun. In September 2013, Amtrak began the construction of a “box tunnel” in the West Side Yards. This tunnel would preserve the right of way for the new tracks from Pennsylvania/Moynihan Station to the new Hudson River Tunnels at the cost of $185 million. The reason for the construction of this tunnel at present time is due to the beginning of construction of the Hudson Yards Redevelopment Project. The Hudson Yards Redevelopment Project, a $20 billion mixed-use development, will be build over the air rights over the West Side Yards.

What We Need to Do

The great American architect and urban planner Daniel Burnham once said “Make no little plans; they have no magic to stir men’s blood.” The construction of the North River and East River tunnels certainly did stir people’s blood. When completed in 1910, the construction of the tunnels was compared to the building of the Panama Canal and the first Transcontinental Railway. Today we must do this again, and the only project that has the power to stir our blood with dreams and ideas is the Gateway Project.

The reason why we must fund and build the Gateway Project is because it is the best option we have. In some ways, it is the only option. Ignoring the damage caused by Super Storm Sandy will not cause it to go away. In fact, the CEO of Amtrak, Joe Boardman, estimates that the North River Tunnels might have as little as seven years of life left in them if nothing is done. Doing nothing would be a textbook example of being penny wise and pound foolish and should not even be considered.

The related option of closing one of the tunnels without a replacement, while doable, would be equally foolish. It would not only create massive problems for commuters in New Jersey and Long Island but also for travelers all along the Northeast Corridor as Amtrak would have to curtail popular services to meet the constraints of having only one tunnel in operation.

The only project that is big enough to stir our blood is the Gateway Project. Constructing a new high-speed rail line between Newark and New York would not only remove two of the biggest bottlenecks in the Northeast Corridor, but it be a crucial first step to building a true high-speed rail line throughout the Northeast. This is why several groups, including NARP, support the project.

Funding for the Gateway Project must be made available by Congress and it must be built as soon as possible. We can no longer wait as the clock is ticking. Estimates for how much longer the tunnels can survive range from a little as seven years to about twenty years. The longer we wait, the more the risk of an accident or disaster occurring increases. It would be a tragedy if the only way for the Gateway Project to move forward would be for the existing tunnels to suffer the same fate as the I-35 West Mississippi Bridge, which tragically collapsed in 2007 with 111 vehicles on it. Every day we wait and delay the project, the closer we get to this outcome, an outcome that nobody wants to see.