The Inconvenience of Driverless Cars 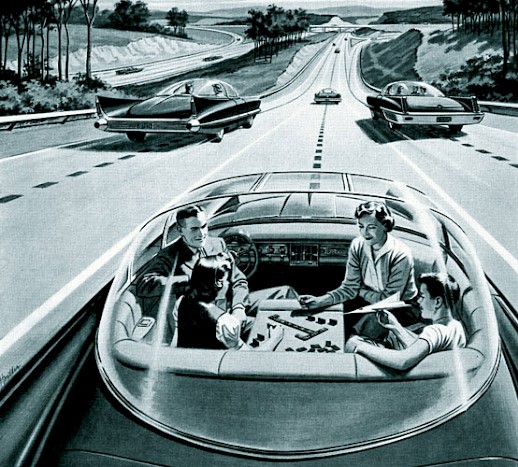 While the fascinating and complex technology behind driverless cars becomes more and more of a reality, there are worrisome externalities and lessons from the past that will need to be confronted. “The Google car is an old-fashioned sort of science fiction: this year’s model of last century’s make” proclaims a recent opus in the November 25th edition of The New Yorker. “Auto Correct” by Burkhard Bilger is a very astute review of the developing technology of driverless cars. The ascent has been rapid. Only in 2004 was the Defense Advanced Research Projects Agency’s ‘Grand Challenge’, a 142 mile race specifically for driverless vehicles through the Mojave Desert. From the New Yorker:

“The Grand Challenge proved to be one of the more humbling events in automotive history. Its sole consolation lay in shared misery. None of the fifteen finalists made it past the first ten miles; seven broke down within a mile. Ohio State’s six-wheel, thirty-thousand-pound TerraMax was brought up short by some bushes; Caltech’s Chevy Tahoe crashed into a fence. Even the winner, Carnegie Mellon, earned at best a Pyrrhic victory. Its robotic Humvee, Sandstorm, drove just seven and a half miles before careering off course. A helicopter later found it beached on an embankment, wreathed in smoke, its back wheels spinning so furiously that they’d burst into flame”

Amazingly, a scant nine years later there now exist Google cars that have driven hundreds of thousands of miles, having caused no incidents whatsoever, all with extraordinarily minimal human intervention in their operations. Current Google cars can drive about 50,000 miles on average without need of human correction. While this is not anywhere near the level of perfection needed for a market production self-driving car, the progress is at a pace where the idea is foreseeable. The feeling emanating from Silicon Valley is one of intense optimism. Quoted in the same article, Sergei Brin, a co-founder of Google, sees it this way:

“’If cars could drive themselves, there would be no need for most people to own them. A fleet of vehicles could operate as a personalized public-transportation system, picking people up and dropping them off independently, waiting at parking lots between calls. They’d be cheaper and more efficient than taxis—by some calculations they’d use half the fuel and a fifth the road space of ordinary cars—and far more flexible than busses or subways. Streets would clear, highways shrink, parking lots turn to parkland. We’re not trying to fit in an existing business model […] We are just on such a different planet.”

Brin is certainly right to say that the vision is outside of current marketing plans. American drivers have been exposed to numerous working parts of automated driving; from cruise control; to adaptive braking; to night vision aid; to automatic parking aids. The automobile industry has been introducing the technology piece by piece, but the overall panacea that Google envisions is certainly not in their shareholders’ best interests. On top of that, there is the inevitable crowding of legal hurdles that the Google cars have yet to jump through. No matter how good the technology becomes, a margin of error will always exist, and the ensuing legal snare is alone enough to bring about a pause in the introduction of such a technology.

Good. This needs to proceed slowly.

While caught in the weeds of the intense innovation needed to bring about this incredible technology, it seems as if some lessons from the 20th century, as well as some environmental realities, are being ignored. The discussion surrounding the potential externalities of this technology is disturbingly absent. This must change.

We have to remember that the mode of transportation begets the kind of built environment that we live in. Just as streetcars built our dense cityscapes, cars built our sprawling suburbs. On the one hand, this technology could be one of the few that could make public transit effectively serve the exurbs, while on the other, they could easily spur the construction of more of it. This is not in the overall interest of sustainable local economies. A country that has in the recent past refused to maintain its infrastructure should heed the fact that the costs of waste collection, policing, fire departments, roads, energy grids, and water mains are far higher in the suburbs, thanks to lower population density using a similar quantity of infrastructure.

We also must remember that physical inactivity is a large factor in why 68% of all adults are overweight. Our built environment is already designed to eliminate as much physical activity as possible, and driverless cars will take that trend to new heights. Alreadythe resulting obesity due to lack of physical activity costs companies $225.8 billion per year in health-related productivity losses. The average healthcare burden exceeds $3,000 per person annually. In a report that we often cite, the VictoriaTransport Policy Institute beautifully illustrated the correlation between transit choice and healthcare outcome in a 2010 study. Relying on public transportation for most of one’s travel needs can reduce the chances of coronary heart disease, adult diabetes, and becoming obese by 50% or more, thanks to the incidental—and subliminal-- physical activity inherent in the process. This reduces much strain on our already beleaguered healthcare system, while driverless cars would enable behavior very much to the contrary.

Most importantly, we can’t get caught up in the disastrous myopia of mid-century America that envisioned a singular solution for ground transportation—the automobile. Time and time again, NARP has argued that a resilient transportation system is one that is comprised of multi-modal redundancy. It’s the cautionary fable of putting all of one’s eggs in one basket, and it is essential that we not lose the concept again for the same reasons. The New Yorker’s assessment of this technology was astute, an “old kind of science fiction.” It must be treated with the kind of careful respect as one would with a nuclear reactor dating from the same era.