The future is multi-modal: Miami edition

A major project, 20 years in the making, to bring all of the ground transportation modes serving America’s 7th-largest city together within easy reach of Miami International Airport, the world’s 28th busiest and the nation’s 12th-busiest airport, and a major international gateway to the Americas, is finally coming together. The $1.7 billion Miami Intermodal Center (MIC, commonly pronounced “mick”) will bring together the second-biggest car rental facility in the US (behind only Atlanta, bringing 12 rental car companies under one five-story roof with shared fueling, car wash and inspection facilities), Miami-Dade Transit’s MetroRail and MetroBus services, Tri-Rail commuter service, Amtrak and Greyhound, all within a 2-minute rubber-tired “people mover” ride of the airport terminal. Also part of the project were roadway improvements which, combined with the improved transit connections, will relieve snarled traffic around the airport, particularly on Le Jeune Road, which is a major north-south commuting artery in addition to being a main access road to the airport. 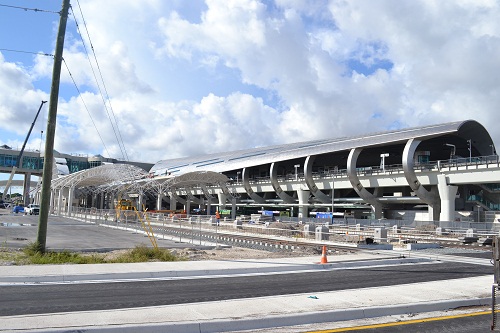 Once opened, visitors arriving by plane, train or bus will find it much easier to get around South Florida by transit or rental car. Currently, the Amtrak terminal is located far from the airport and Greyhound, while closer, is not walking distance from the airport. Tri-Rail, a little closer still, requires a bus connection to the airport. Now, they will all converge at the same place, which will offer plenty of parking, nearby hotels, and other amenities thanks to proximity to the airport, and a quick one-seat rail transit ride to downtown Miami (home of the future All Aboard Florida train terminal) or an express bus connection to Miami Beach.

MIC Work Program and Budget Administrator Adolfo Fassrainer and Public Affairs Specialist Cory McKnight escorted me on a tour of the entire MIC facility on Tuesday, including the completed (in July 2010) Rental Car Center and Miami-Dade Transit terminal (plus a ride on the MIA Mover, which opened September 2011) and the under-construction “Miami Central Station.” This will feature one island platform (2 tracks) for Tri-Rail and another for Amtrak, plus bus bays for Greyhound and other intercity bus operators. Both platforms and the intercity bus terminal will be connected to an overpass with direct passage into the Rental Car Center and the MetroRail and MIA Mover terminals. At the south end of the platforms will be station facilities for Tri-Rail and Amtrak, across a walkway from each other. Both platforms will be covered by giant, ultra-modern arched white steel canopies. All materials used in the construction meet rigorous environmental sustainability and Buy America standards, and the structures are designed to withstand hurricanes.

Planning, designing and building the Miami Intermodal Center has been a learning curve for the Florida Department of Transportation (FDOT), the lead public agency on the project. FDOT, which has owned the South Florida Rail Corridor since 1988, relied on CSX to operate and manage the entire 72-mile corridor for FDOT until the MIC Corridor abandonment. This put FDOT in a difficult position when, in 2011 (when the rail portion of the project was still in its formative stages, CSX abandoned its freight easement the last 700 feet of the State-owned right of way leading into the MIC site. FDOT was counting on CSX’s expertise to handle the rail component of the project, but in their absence, FDOT had to learn how to build and maintain tracks, signals, switches and grade crossings on its own.

In the process of planning and building the MIC, FDOT officials have come to see multi-modalism as the way of the future, a change of mindset that should bode well for other parts of the state that are facing worsening traffic congestion as Florida continues to add about 3 million residents each decade. More transit-oriented neighborhoods and activity centers will also be needed to serve these added people, and the MIC project can be a model for this as well, as 1.4 million square feet at the site have been set aside for FDOT to lease or sell to a developer for office space, a hotel/conference center, restaurants and/or ancillary retail.

The MIC development has not gone 100% smoothly. FDOT is constructing two platforms, one exclusively for Tri-Rail and the second will be shared between Amtrak and Tri-Rail. The platforms are constrained to the north by a local road, NW 25th Street. Each of Amtrak’s trains serving South Florida, the Silver Star and Silver Meteor, each has a different length configuration, and future train services may have different lengths still. Although FDOT consulted extensively with both Tri-Rail and Amtrak in the design of Miami Central Station, they determined that the platforms (which are on terminal tracks with bumpers at the south end) would not be long enough to accommodate a typical 12-car (including 2 locomotives) Silver Meteor consist, much less the longer consists used during peak travel periods, without the train blocking the grade crossing of NW 25th Street at the north end of the platforms.

Amtrak and FDOT have been working together to minimize the impacts to NW 25th Street due to longer trains. FDOT is proceeding with the construction of a run-around road, which will allow motorists to detour to NW 28th Street when Amtrak trains are impacting NW 25th Street. The runaround road will be completed early 2016. Part of FDOT’s solution is to devise a system of electronic displays that will direct motorists to the alternate route across the tracks at times when the crossing gates are down on NW 25th St (they may be down when a train isn’t actually blocking the crossing, to keep pedestrians and motorists at a safe distance from trains stopped at the platform, which can always begin moving with little notice).

Here are some photos I took on my tour of this grand facility, which should serve residents and visitors to South Florida for the better part of the coming century: 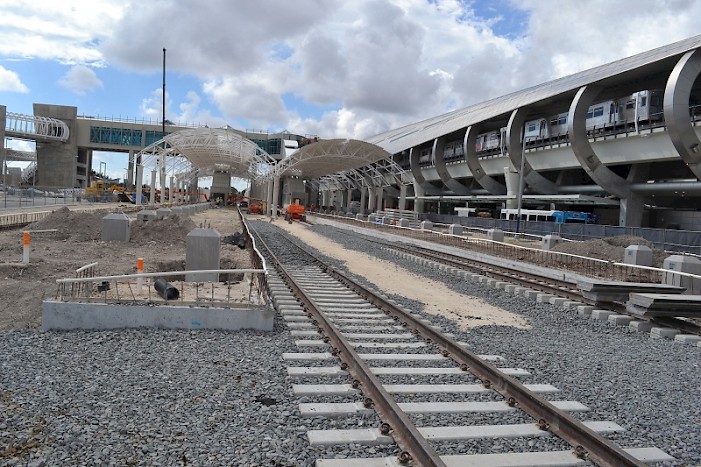 Future Amtrak & Tri-Rail tracks, seen from the NW 25th Street crossing at the north end of the platforms. 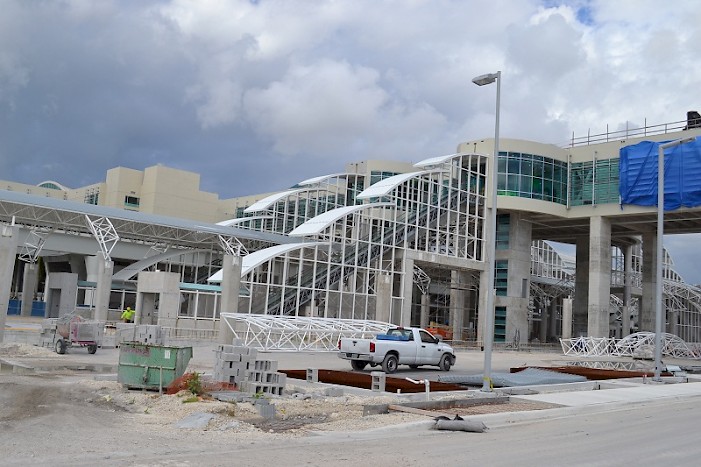 Escalators and elevators between the future Amtrak and Tri-Rail platforms and the concourse linking them to the other modes serving the MIC. 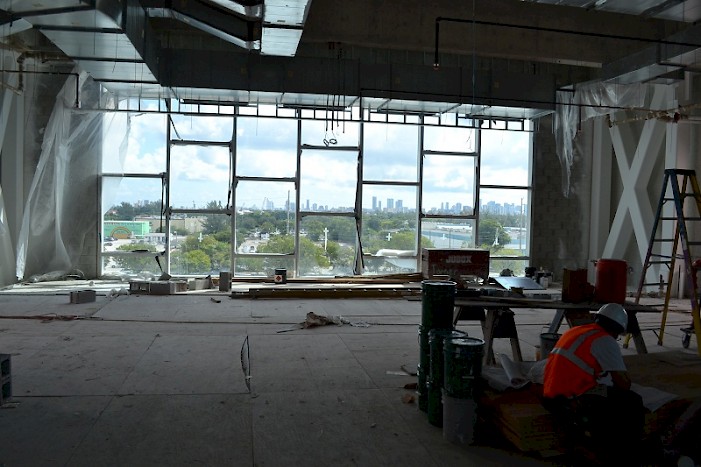 The window at the east end of the elevated concourse offers a sweeping view of the Miami skyline. 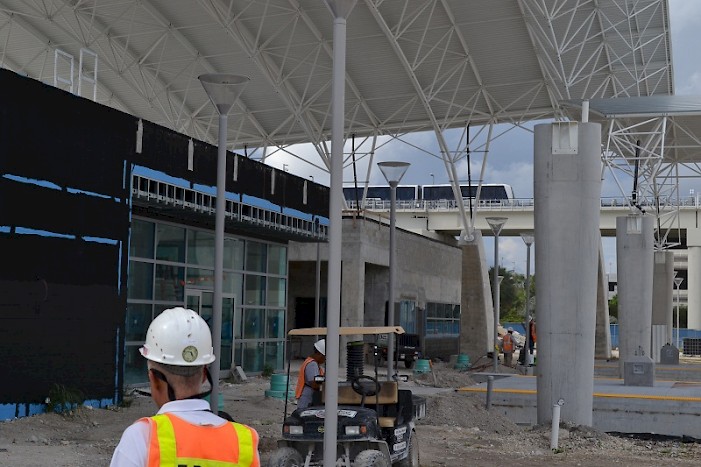 The future Miami Amtrak (left) and Tri-Rail (right) station facilities, at the south end of the platforms. The Amtrak station will feature a large checked baggage area and a crew locker and rest area with a shower. 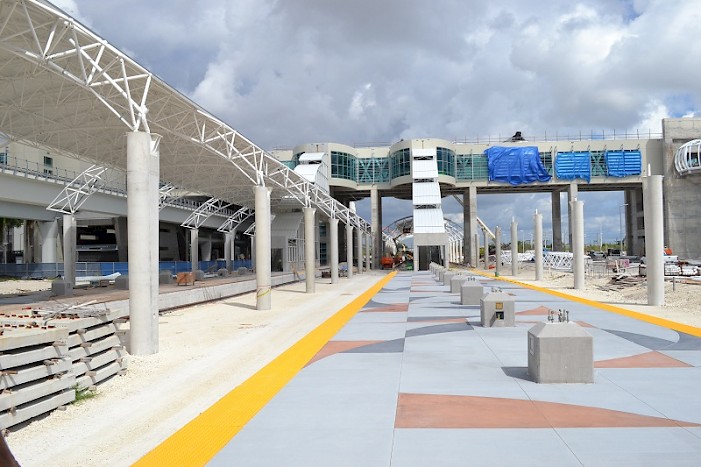 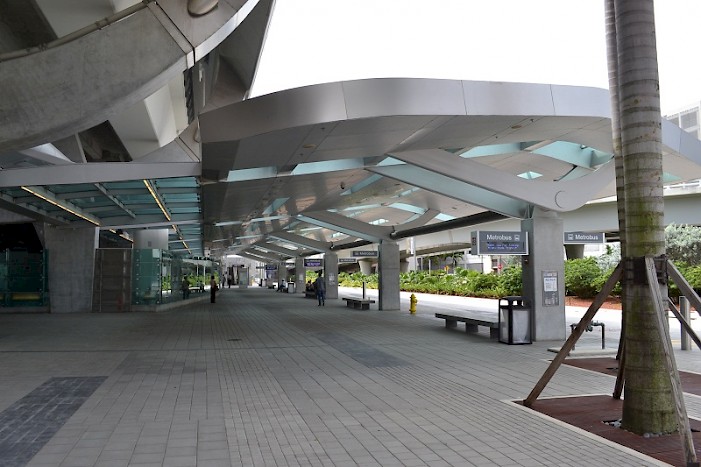 The MetroBus terminal at the MIC, located underneath the MetroRail station, with escalator and elevator access to the concourse. 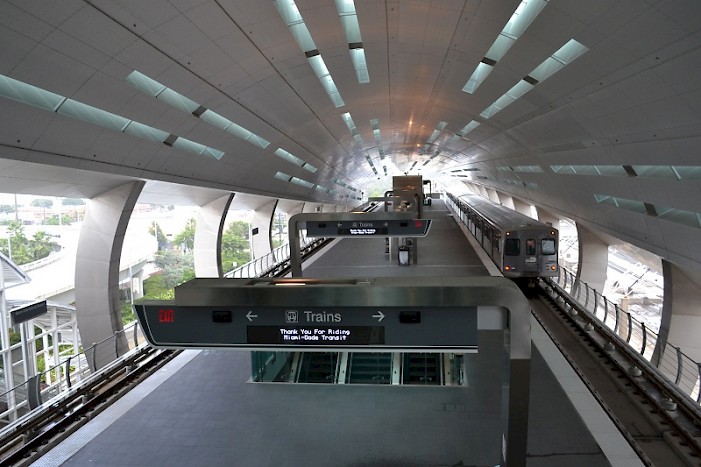 The ultra-modern Metrorail Airport station at the MIC, between the Amtrak/Tri-Rail platforms and the rental car facility. 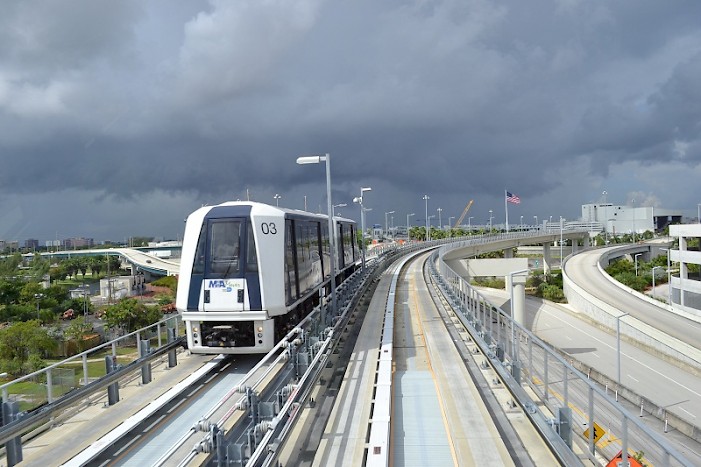 The rubber-tired MIA Mover, which offers a 2-minute ride from the MIC (between the rental car center and MetroRail station) to the airport terminal, at 3-minute headways.