The federal bias towards roads and cars

The pro-highway federal bias is clearly illustrated in these two ways, among others.

First, when general funds are transferred into the Highway Trust Fund, they become encumbered with the same restrictions as revenues generated by the gasoline tax and the other ‘normal’ Highway Trust Fund sources. This means they usually cannot be used for intercity passenger rail projects, and have the same restrictions regarding use for transit as those ‘normal’ HTF sources.Intercity passenger rail remains the only mode of motorized transportation without some kind of trust fund or dedicated pot of money for capital investment.

Then there is the lack of parity between pre-tax employer provided transit benefits. Parking benefits are enshrined in law at a high level, and indexed to inflation so they normally rise every year. Transit is “enshrined” only at $130 a month. Thus, come January 1, 2014, the transit benefit falls from $245 back to $130, while the parking benefit rises $5 to $250. Although Congress eventually might fix this mess (again) retroactively, retroactive benefits are complicated for employers to deal with and so often are not implemented. 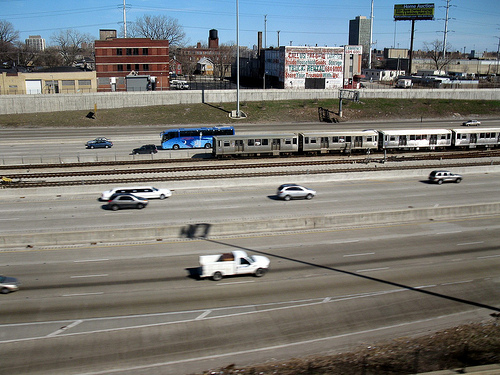 Chicago's Red Line in the median of the Dan Ryan Expressway.