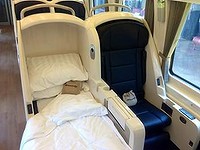 QUEENSLAND, AUSTRALIA-- A new tilt train in Australia is making headlines for its speed, but also for its ‘unique’ accommodations:

“The Spirit of Queensland departed Roma Street Monday afternoon and will reach Cairns six hours sooner than its counterpart has done since 1953.The new tilt train will cover the 1861km in 25 hours, at speeds of up to 160km/hr. Passengers can choose standard seating, or more swanky recliner "railbeds". Executive General Manager of Customer Service for Queensland Rail Martin Ryan said the Spirit of Queensland is about the journey that passengers take, not just their destination. ‘This is a whole new fitout of this train and this is a whole new different rail experience, where the RailBeds are just world class,’ he said.”

While adopting fold-flat seats does represent a slightly new approach to passenger accommodations aboard rails, it does not constitute a “whole new different rail experience.” Passengers have been sleeping comfortably on trains for over a century. It is of note that airplane manufacturers first borrowed the idea of compact but luxurious sleeping accommodations from the railways themselves. A good example would be the pre-jet Boeing Stratocruiser of 1947, which featured accommodations that resembled a prominent railroad innovation of the 19th century. 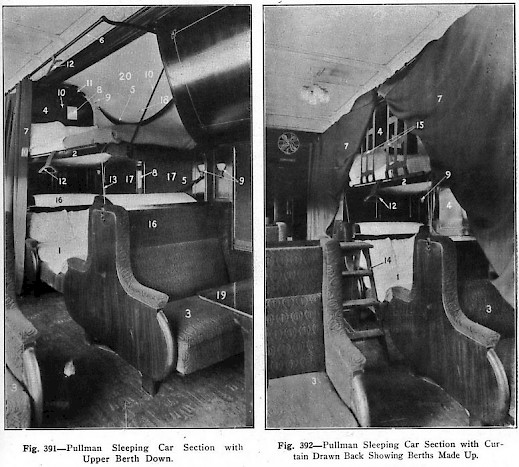 Pullman Berths were used by as many as 100,000 americans each night during their heyday

Aghast at the intolerable experience of riding cross-country in a day coach, George M. Pullman created what may have been the first bed on rails, known to millions of passengers throughout the 19th and 20th centuries as “The Pullman Berth.” Originally a first class accommodation, as rail transport advanced, it became more and more of an economy option. Indeed, it remains the cheapest first class accommodation on VIA Rail’s esteemed Canadian. The Pullman berth consisted of two loveseat size sofas facing each other, folding together at night to become a bed, with a second lowering from the ceiling, much like an Amtrak Roomette today with no partition facing the corridor.

By the 1950’s rail accommodations had diversified intensely, with almost every conceivable permutation of a hotel room on wheels having been explored. In the face of diminishing ridership towards the end of the fifties and early sixties, an economy player was introduced by the Budd Company of Philadelphia. By staggering private rooms on top of each other, a “slumbercoach” as they came to be known could accommodate almost as many passengers as a standard passenger coach. For a very slight fee, a coach-class passenger could have a private room and bed. Rooms were quite small, but then again, so was the price. The cars continued to serve under Amtrak until the mid 1990’s, evidence of the worth inherent in the concept.

With proper investment and attention devoted to a robust national network of trains, it is foreseeable to see such a range of accommodations once again grace the American travel experience. Trains contain expandable environments that have been in the past used in very creative ways. Given a non-anemic governmental commitment to passenger train service, it is entirely foreseeable that we will again be graced with a multitude of enjoyable options for travel.