Shared Economy : Passenger Trains Have Been Ahead of the Curve

I have at many times in the past referred to the great train stations of this country as “Secular Cathedrals”—temples to the ideals of commerce and civic pride. Train stations and train travel assume a baseline of civility, as a shared experience moving from a public temple to mobility, to a public means of mobility. Even at the height of elite train travel at luxury prices, a time when the Pullman company referred to it’s accommodations as “your own 5 room apartment on rails,” three out of those five rooms were public space, from your own ‘dining room,’ to your own ‘lounge.’ The shared nature of train travel has been useful for everything from media commentary such as Alfred Hitchcock’s Strangers on a Train to the modern day social laboratory of the Millennial Trains Project.

While this concept has in the past served as positive lore at best, and quaint nostalgia at worst, I was reminded of this essential communality upon reading Tuesday, the 24th’s edition of The Financial Times. The article was an overview of how the housing market is shifting from ownership, to renting—and how this is reflective of the overall tectonic economic change to “the so-called sharing economy,” in which “Americans are acclimatizing to the idea of giving up ownership for the flexibility of being a renter, from films on the internet through Netflix and vehicles through Zipcar to temporary accommodation via Air Bnb.”

Of course, there is even more variation to the market than the piece suggests. Back in 2011 Fast Company’s excellent overview of this emerging “sharing economy” highlighted several key facets of this brave and ‘new’ landscape. That outright ownership of capital, may that refer to a part of a house, an expensive tool, or a car, leads to inefficient utilization. Leave it to an economic crisis to get us thinking about asset utilization in a meaningful way, and what serendipity for it to happen in a time when mobile technology can connect these widely distributed relationships and leverage them into desirable outcomes.

“Lisa Gansky gave a TEDx talk to an audience of some 300 people in the Fisher Theatre, including designers from brands such as Ford and Lincoln. She asked the crowd what percentage of time the average person uses his car. While a couple of folks mumbled a guess, no one was prepared for the statistic Gansky had at hand. "Across the U.S., Canada, and Western Europe, it's 8%," she said. "Which means that over 90% of the time, this thing that costs us a lot of money is just sitting around."’

Thus it is little wonder why we see services such as Car2Go and the various renegade taxi applications working with such remarkable success. Perhaps it is necessity and efficiency that dictates that we now are beginning share the very implement that used to insulate us from the world around us. Somewhere in that shift must be a glimmer of cognizance that absolute insulated individuality… isn’t all that efficient.

This newfound civic trust can’t help but bring to mind passenger railways, and how this general trust in communality has been integral to them for as long as they’ve existed. “Your” room on the train will always be someone else’s within a day or so of it being yours. It makes it even clearer why trains are becoming more and more popular in this day and age. 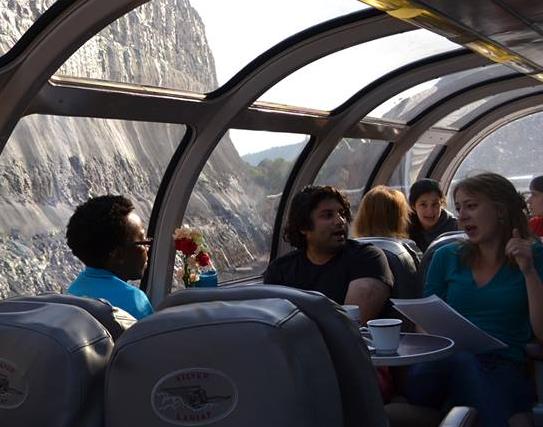