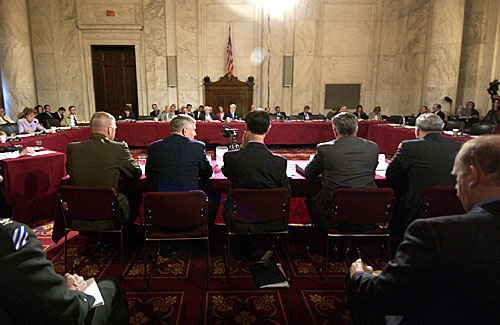 To read NARP’s policy recommendations for achieving a better national rail network, you can read the witness testimony we submitted this week to the Senate.

The U.S. Senate Committee on Commerce, Science, and Transportation’s Subcommittee on Surface Transportation held a hearing on the future of passenger rail, underscoring the growing urgency of investment needs and the potential for trains to act as a catalyst for growth for the U.S. economy.

Titled “Passenger Rail: Investing in our Nation’s Future,” the hearing featured testimony from the U.S. Department of Transportation, Amtrak, organized labor, and independent operators. All were unified in there call for inclusion of passenger rail into a comprehensive surface transportation bill, to ensure that trains get the same predictable, dedicated funding that highways and transit rely upon. Incoming Chairman John Thune’s (R-SD) statements that a packed 2015 legislative schedule will diminish the chances for a standalone rail bill is all the more reason to put passenger trains on an equal footing with roads.

Significantly, Amtrak Chairman Anthony Coscia stated that, while the Northeast Corridor (NEC) is the biggest success story in the national rail network, this is mainly due to the fact that it is the one corridor that federal and state governments have invested any in with a sense of purpose. Coscia pointed to other regions with similar growth potential, arguing investments in these passenger rail corridors could act as a tool to grow our economy, reduce traffic congestion on other modes, and create new travel opportunities.

“Record Amtrak ridership in the country’s mega-regions—not only the NEC, but also the Chicago Hub area, California and the Pacific Northwest—hints at the tremendous opportunity for truly modern passenger rail service links between dynamic city pairs,” said Coscia. “Passenger rail could be so much more, our economies could be stronger, and our lives better, if trains were faster, more frequent and more reliable in these regions. This is to say nothing of the regions around the country where little or no high-quality rail connects metropolitan areas—regions like Atlanta to Charlotte, Houston to Dallas, Miami to Tampa, Pittsburgh to Cleveland, and Tucson to Phoenix. As a nation, we are squandering opportunities to improve our economies and quality of life by failing to make investments in the type of high-quality rail service that Amtrak plans for the NEC and that we see in existence or under development in nearly every other major economy in the world.”

Of course, the long-distance network offers hundreds of unique city pairs, connecting not only large metropolises, but small- and mid-sized communities as well. Increasing frequencies, improving reliability, and purchasing modern equipment on long-distance routes would lead to the same kind of growth in ridership and revenue that the NEC has experienced—and ultimately lower the operating costs and the need for public appropriations.

Ranking Member Roy Blunt (R-MO) spoke during the hearing, asking Association of Independent Passenger Rail Operators’ (AIPRO) representative about the potential for leveraging private investment to improve the experience of America’s passengers. It’s true that, in the vacuum created by a lack of federal investment, a handful of private companies have stepped up to develop train service without public funding. NARP has endorsed some of these projects—most notably All Aboard Florida, which will connect Miami and Orlando; Texas Central Railway, which will connect Dallas and Houston; and XpressWest which will connect Las Vegas to Palmdale and the state of California’s high-speed rail system. While these 100 percent privately funded projects will be limited to a few high-value corridors, they are instructive in demonstrating the ability of the private sector to contribute to passenger rail development. NARP has collaborated with the AIPRO and we generally endorse their approach to state services. We encourage the Committee to work with independent operators in ensuring that states have the tools they need to improve and expand these corridors.

AIPRO’s President Ray Chambers reiterated the call for a unified transportation fund that includes robust rail funding in his testimony, and endorsed NARP’s plan for strengthening the national network in their testimony to the committee.