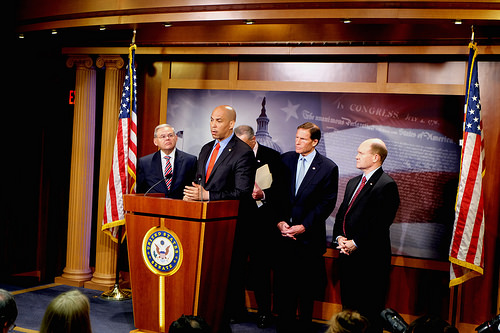 The Senate Appropriations Subcommittee on Transportation, Housing and Urban Development, and Related Agencies approved a fiscal year 2016 funding bill that extends current levels of funding for Amtrak at $1.4 billion, rejecting cuts made in the House version of the T-HUD bill. That version of the bill slashed Amtrak funding by $262 million, transit funding by $161 million, and funding for the intermodal TIGER grant program by $400 million.

Fortunately, the Senate measure provided $1.1 billion in capital funding, $289 million in operating funds, and $17 million targeted to the Northeast Corridor. The committee highlighted $50 million in rail safety grants which will help passenger railroads install Positive Train Control (PTC), a life-saving technology federal investigators say could have prevented the deadly May 2015 train crash outside of Philadelphia.

However, while the Senate did well to reject the majority of the House’s cuts, they didn’t go far enough to meet the rapidly growing infrastructure investment backlog facing the country. The subcommittee’s measure slashes $424 million from Federal Transit Administration account, with most cuts coming from the New Starts program, geared toward initiating and expanding heavy- and light-rail urban transit systems. These systems are vital to help deal with surging ridership, and will help America’s cities grow to meet 21st-century economic demand.

This need was once again highlighted June 22 when the bipartisan U.S. Conference of Mayors adopted resolutions calling for greater investment in rail safety and improved funding for transportation at its national meeting in San Francisco.

The fact that the Senate bill provides level funding for highways—presuming Congress will find a yet-to-be-determined financial fix for the perpetually insolvent Highway Trust Fund—and an additional $294 million for the Federal Aviation Administration—bringing the total federal expenditure to $16 billion—proves that appropriators are capable of finding the money when it suits them.

Join NARP in asking the Senate to support the Wicker/Booker passenger rail bill, a forward-looking proposal that looks to expand the national train network, and to strengthen that bill through the introduction of dedicated funding for rail!

Federal Railroad Administration – $1.68 billion, an increase of $53 million above the FY2015 enacted level. This includes $289 million for Amtrak operations and continued service for all current routes, and $1.1 billion for capital grants. The bill also provides an additional $17 million for the Northeast Corridor.