On today’s eastbound Capitol Limited (yesterday evening’s Chicago departure), Amtrak conducted its first over-the-road test of vertically-mounted bicycle restraints installed in the lower-level baggage area of one Superliner coach. This represented the first time unboxed bikes were carried on a Superliner-equipped train since they were carried on the Cardinalbefore the train was re-equipped with single-level cars in 2002. 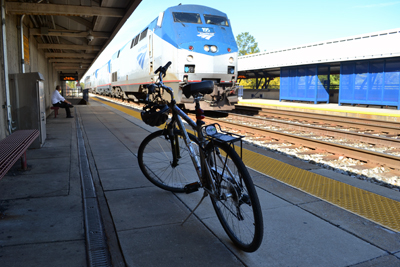 A selected group of cyclists, myself included, boarded with their bikes at Pittsburgh, Connellsville, Harpers Ferry and Rockville. Some detrained at Harpers Ferry, the rest at Washington. At each station, the side door to the previously unused baggage area was opened, cyclists hoisted themselves and their bikes onto the train, and secured their bikes on the racks by first hooking the front wheel to a padded metal hook, then sliding the rear wheel into a U-shaped metal restraining device that springs up from the floor to prevent the bike from shifting side-to-side as the train moves. Below are photos from my experience.

The test went off without a hitch. There minor concerns about the process of loading and unloading bikes, how people with different levels of physical ability would negotiate the process, and whether the process would cause avoidable delay to the train with longer station stops, but everyone was able to load and unload their bikes safely and without assistance (after having read the instructions that had been emailed to each participant before the trip).

Amtrak is interested in allowing passenger to carry unboxed bikes on long-distance routes, and figures theCapitol Limited is a logical one to start with as its route parallels the Great Allegheny Passage and the C&O Canal towpath, two internationally popular bike trails (the former was once a railroad right-of-way that roughly paralleled the tracks the Capitol Limited uses). One concern is that the six bike racks in the Superliner baggage area would not be enough to handle demand in the summer, when thousands of cyclists use the trails between Pittsburgh and Washington.

Installing the bike racks in Superliner coach baggage areas would cost roughly $8,000 per car. Lacking wiggle room in its budget, Amtrak would not commit to a timeline for implementation of unboxed bike carriage in regular revenue service, but suggested that this cost could be paid by a corporate sponsor or nonprofit organization or by appropriations from Congress. While Amtrak would like to equip the entire Superliner fleet at once, it would take a minimum of 6 equipped coach-baggage cars to allow for the service on the Capitol Limited route alone.

NARP will continue to join cycling advocacy groups in calling for Amtrak and its state partners (who will have to propose and pay for such service on routes under 750 miles outside the Northeast Corridor) to allow for unboxed bicycle carriage on all routes, balancing the desire to accommodate as many bikes as possible with space constraints and the need to maintain adequate coach and food service car seating, particularly on single-level trains. This fits in one of NARP’s overarching goals: seamless connectivity between intercity passenger trains and other modes—bicycling being a travel mode that many rely on, and would help more passengers solve the “last mile” problem that can cause people to choose to drive versus taking the train. NARP will also ask advocates of cycling and other travel modes that complement trains to join with us in calling on Congress to provide Amtrak the reliable funding it needs to procure more equipment so more people (and their bikes) can be carried on existing routes and new routes can be added. 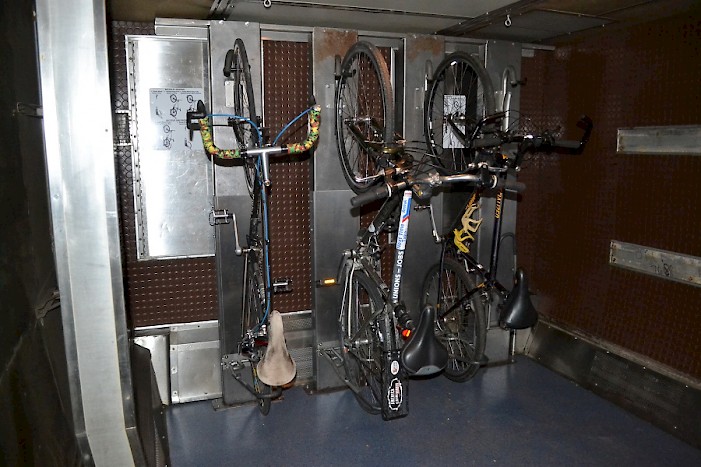 Passengers' bicycles secured in the lower-level baggage area of a Superliner coach. 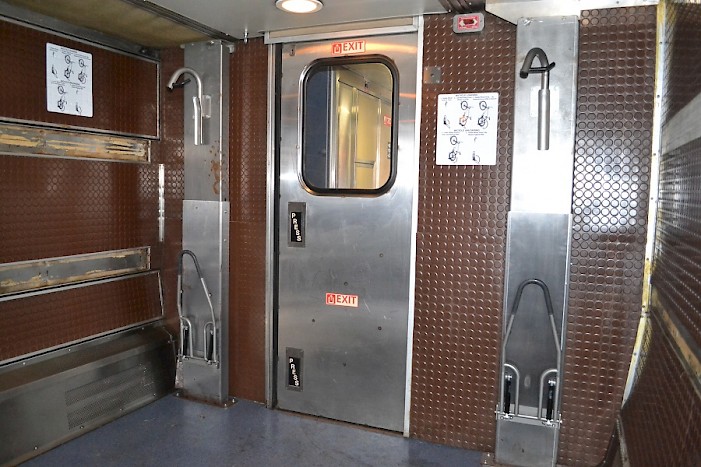 Two racks, in addition to the four on the opposite wall, bookend the door from the baggage area into the lower-level hallway. 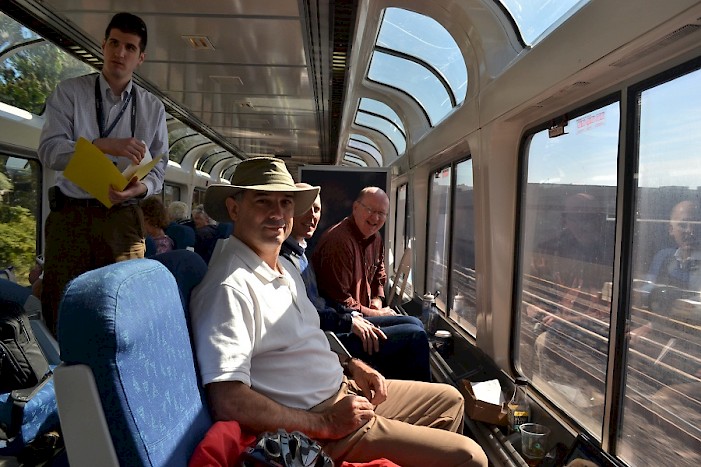 Members of the Virginia Bicycling Federation, who brought their bikes onboard at Harpers Ferry, WV for the trail, relax in the Capitol Limited's Sightseer Lounge car. 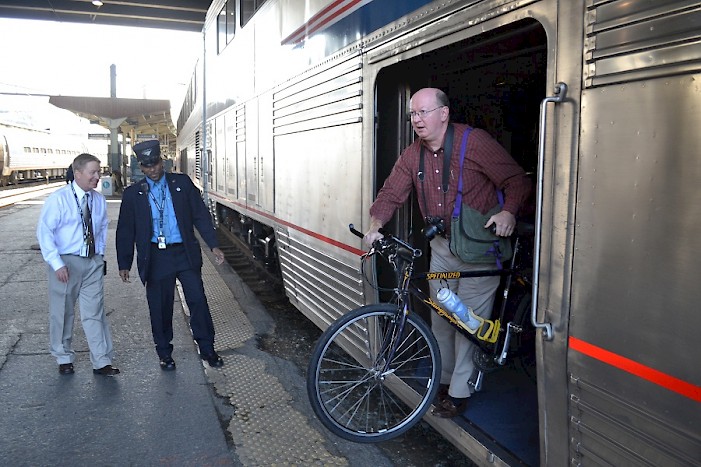 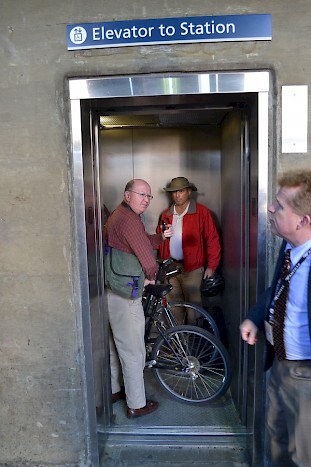 Trial participants take their bikes on the platform elevator into the station at Washington.