Riding the Iron Longhorn: An Overview of the Texas Central Railway Project

When one visualizes Texas, several images come to mind: things like cowboys, cattle, barbeque, oil fields, big cities, small towns, open plains and Friday Night lights. A high-speed train blasting through the open Texas countryside may not be part of your vision -- but that might change soon. Two years ago, a private company, Texas Central Railway, announced that it was planning on building a high-speed rail line from Dallas to Houston by 2021. The company would run trains on the line at speeds up to 200 miles per hour allowing passengers to travel between Houston and Dallas in 90 minutes. They would construct and operate the project with no public money, making the Texas Central Railway the first privately financed high-speed rail line in the country.

A project of this scale has caught the imagination of people both in Texas and throughout the country. To better understand the Texas Central Railway we should also look at the reasons why Texas is uniquely suited for high-speed rail, the reasons why previous attempts to construct a system have failed, the current status of the project and what the implications of the success or failure of the Texas Central Railway would be on Texas, our rail network and the nation as a whole. 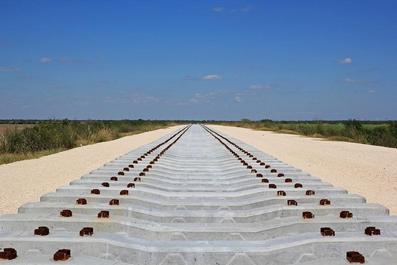 Why Is Texas Great For High-Speed Rail?

Texas is a paradox when it comes to high-speed rail; it has several qualities that would make it ideal for high-speed trains, while simultaneously having qualities that would make successfully operating high-speed rail difficult. In terms of distance between large cities, Texas hit the jackpot. The fourth, seventh, ninth, eleventh and seventeenth largest cities in the country are all located within 200 to 300 miles of each other in Texas. The two that Texas Central Railway wants to connect initially -- Dallas and Houston-- are only 240 miles apart. Having so many cities close enough together would allow high-speed rail to be extremely competitive with flying and driving. In addition, the landscape of the Texas Triangle, the area between San Antonio, Dallas and Houston, is ideal for high-speed rail construction and operation. Flat and sparsely populated, the construction costs for building high-speed rail track would be lower than in other places, minimizing the cost of constructing the straight, flat track high speed trains require. Finally, because all of these cities are located within one state, the number of participants in the planning process is reduced, simplifying it. Instead of dealing with multiple state governments, only one is needed.

Paradoxically, there are some problems with Texas that could make operating a high-speed rail network difficult. Unlike other large cities throughout the country, Texas’ cities have weak and underdeveloped mass transportation systems. Although both Dallas and Houston have light-rail systems, they are not as large and robust as systems in places like New York, Chicago and Los Angeles. Cities that may be eventually connected to the system like Austin and Fort Worth only have a single commuter train line. San Antonio, the third point of the Texas Triangle, does not have any mass transit or commuter rail systems at all. This means that when the Texas Central Railway is constructed, a passenger would have to use cabs, rent a car or be dependent on immature transit systems to get around the city and to their final destinations.

(Ironically, the mere fact of the train itself might play a critical role in solving this problem. Dallas transit planners are speeding development of the local transit system to take advantage of TCR’s project.)

The Texas Central Railway is not the first attempt to build a high-speed rail network in the Lone Star State. Back in 1991, the Texas High Speed Rail Authority granted a 50 year franchise to Texas TGV to build and operate a system that would connect the Texas Triangle. Texas TGV was a consortium made up of several companies including Morrison Knuderson, Bombardier, and GEC/Alstom, along with several major financial institutions. The plan was to build the entire system at once and at a cost of $5.6 billion. However, due to fierce opposition from Southwest Airlines, farmers and then Agriculture Commissioner George W. Bush and delays in raising money necessary to do the environmental impact survey, Texas TGV had its franchise revoked by the State of Texas in 1994, killing the project. By that time the costs had risen to $6.8 billion and $70 million had been spent and lost by the investors.

There were later attempts at building high-speed rail lines in Texas. In 2001, then Governor Rick Perry proposed that high-speed rail lines be part of his Trans-Texas Corridor project. However, lack of funds and political pushback caused this project to be canceled in 2009. In 2000, the route from San Antonio to Dallas was designated as part of the South Central Corridor by the Federal Railway Administration. It was later incorporated into the Federal Railway Administration’s Vision for High Speed Rail in America in 2009. The South Central Corridor also included two branches going north of Dallas with one going to Tulsa and the other to Little Rock. Since the corridor was designated, there has been almost no funding on this route.

What Is the Texas Central Railway?

What Is the Plan for the Texas Central Railway?

As previously stated, the plan is to build a high-speed rail line between Houston and Dallas. The total cost has been estimated at $10 billion and the line will transport passengers between the two cities in 90 minutes at speeds of up to 200 miles per hour. This speed is possible due to the use of the N-700 series shinkansen that will be used on the route. The N-700 is the latest incarnation of the famous Japanese bullet train and has been in service in Japan since 2007. Currently limited to a top speed of 186 miles per hour, the train has reached speeds of up to 206 miles per hour on test runs and is expected to operate at speeds up to 205 miles per hour when running in Texas. In addition to a high top speed, the N-700 has exceptional acceleration, being able to move an eight car train from zero to 170 miles per hour in only 180 seconds.

What is the Current Status of the Texas Central Railway?

Currently, Texas Central Railway is busy raising money and conducting the draft environmental impact survey (EIS) on the route they will take between Dallas and Houston. It is expected that the EIS will be published in 2015. As part of the EIS, the Texas Central Railway has hosted several open houses in Houston, Dallas and towns along the route in October and November 2014. It was at these open houses that the two possible routes that were being studied were released and discussed. Both routesroughly parallel the existing Interstate-45 highway between the two cities. The first route would shadow the existing BNSF rail line that currently runs between the two cities. The second route would follow the existing utility corridor that carries high-voltage electrical lines between Houston and Dallas. The reason for choosing these two routes was because they required the least amount of extra land needed for the right of way, roughly 3,000 acres (5 square miles).

While the possible route between Houston and Dallas is now known, there still remain several unanswered questions, such as where the terminals in Dallas and Houston will be located. Currently, the plans call for two stations, one in each city, with the possibility of building a station near Bryan-College Station in the future. In Houston there are four options being considered. Three of them are located northwest of the city’s center and one site is located in the city’s downtown area. In Dallas, there are three options being considered. The first is at the intersection of Interstate 20 and Interstate 45. The second is at the intersection of Interstate 45 and Loop 12. The third and final possible terminal location would be in the SW corner of Dallas. The potential site of the Dallas terminal has already caused some controversy as residents and political leaders have expressed their desire to have the Dallas terminal be at Dallas Union Station, the city’s current transportation hub and inter-city train station.

At some of the meetings in the communities between Houston and Dallas, local tea party groups, such as the Sam Houston Tea Party, have expressed their opposition to the project, questioning the assertion by Texas Central Railway that the project can be built and operated with only private funding. In addition to these groups, residents along the route have complained that the project does nothing for them or their communities. As one resident put it “we’re putting in a rail line that’s going to serve the city dwellers”. Finally, one of the counties along the route of the Texas Central Railway, Leon County, is opposing the routing of the project, passing a resolution in protest. Both route options pass through the county. It is important to note though that Southwest Airlines, the primary opponent of the Texas TGV project, has remained neutral in this project. Some observers have noted that today Southwest Airlines in not as dependent as it used to be on their flights in the Texas Triangle and this is why they are not vocally opposing the project as they had done in the past.

The Implications of the Texas Central Railway

A successful Texas Central Railway would definitely inspire and encourage similar developments and projects throughout the country. The two most likely beneficiaries would be high-speed rail projects in Florida and California. The Florida projects will probably be built first, as Florida shares some of the same characteristics as Texas; large cities, the right distance between them and flat terrain. Despite having large cities that are the right distance from each other, California’s system will probably be built later, mostly due to the difficulty in building through mountainous terrain.

It has been said that if you can make it in New York, you can make it anywhere. While that may be true for dreamers, artists and businesspeople, for high-speed rail to really catch on in America, it has to succeed in a place that is on the surface not suited for it. One of the best places like this is Texas. If Texas Central Railway can be successful in a state known for its love of cars, petroleum and conservative politics, it can be successful anywhere. That is why NARP has endorsed and supports Texas Central Railway and its project to build a high-speed rail line between Houston and Dallas. Soon, passengers in Texas will be able to take off their Stetsons and eat a Texas barbeque sandwich as they whisk through the Texas countryside at 200 miles per hour while riding the iron longhorn.