Designers working on bringing Amtrak’s new Intercity Trainset project to life spent this week gathering feedback from stakeholders, including your Rail Passengers Association, on key elements of the interior design, culminating in a walkthrough this afternoon by Rail Passengers President & CEO Jim Mathews of a “soft mockup” at Philadelphia’s 30th St. station.

Designers working on bringing Amtrak’s new Intercity Trainset project to life spent this week gathering feedback from stakeholders, including your Rail Passengers Association, on key elements of the interior design, culminating in a walkthrough this afternoon by Rail Passengers President & CEO Jim Mathews of a “soft mockup” at Philadelphia’s 30th St. station.

Design reviews started last summer, almost immediately after Amtrak announced the $7.3 billion deal for at least 83 and as many as 213 dual-power (diesel and AC catenary) trainsets from Siemens, which will resemble the Brightline trainsets operating today in Florida.

The idea behind a “soft mockup” is to use it as the first physical review of a representative portion of the interiors of the trainsets, where designers and outside stakeholders can begin to get a sense of accessibility, aisle width, and placement of things like luggage racks, seats, tables, the luggage tower, the size and location of the vestibule and side doors, and the toilets.

A soft mockup is not about actual production seats, cushions, fabrics, colors, textures, or fittings. Feedback during the soft mockup is used to shape a later “hard mockup review,” when the soft mockups will be replaced with production-standard parts as much as possible. The interior hard mockup will take place at the end of next month, which is about the same time that designers will be ready with a “soft mockup” of the galley and food service areas.

Hard mockups on the food-preparation areas should happen in late summer, and Siemens expects to begin car shell production of the new equipment late this year.

“In 2019, when I testified before the House Transportation & Infrastructure Committee, I told lawmakers how important it was to give Amtrak the ability to commit long term to replacing what I called a ‘rolling museum’ of tired old equipment,” Mathews said. “Today’s soft mockup review is an exciting first step in finally giving America’s passengers what they deserve: modern, clean, accessible, comfortable, appealing trainsets that will be new enough – and with enough Siemens technical support – to ensure that passengers will get where they need to go safely, efficiently, and on-time.”

During today’s walkthrough, Jim was looking to assess a few specific areas around passenger layout, especially those for the disabled community. Does the Accessible Toilet Room design arrangement meet all of the requirements of the Americans with Disabilities Act (ADA) for layout, movement, and access to buttons and handles and sinks and the like? What is the path of travel from the entrance door through the vestibule to the seating area designated as ADA accessible? In the accessible seating area, where are the amenities and features located, and how comfortable is that area? Are the interior features in the right places? Does the interior “make sense” for passengers with disabilities?

Jim also had the opportunity to look at a few different configurations for general passenger seating areas. The mockup included two 2-person coach seats, two 1-person coach seats, with a workstation table to simulate a food-service car arrangement, and two 2-person business class seats, with a workstation table. We also examined the positions of electrical outlets, USB ports, and the location, shape, color, visibility, and other characteristics of various other non-functional buttons and switches. 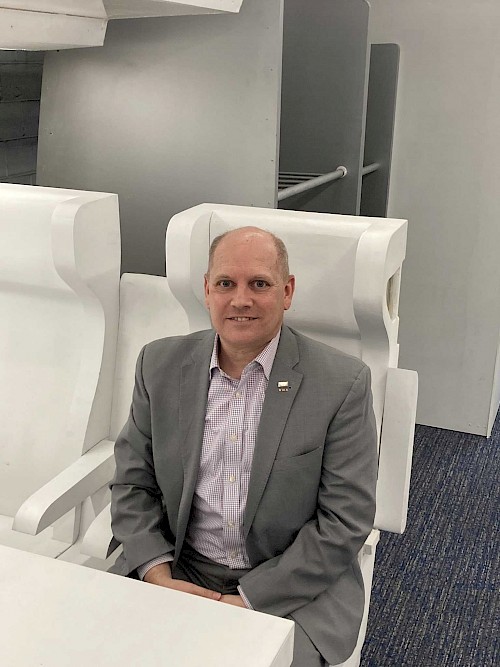 Rail Passengers is looking forward to continuing to participate in the mockup process, sharing the voice of America’s passengers as this historic equipment order begins to make a difference for the communities it will serve.