In a presentation organized by the Japan International Transport Institute in Washington DC, Grady Cothen today made an excellent presentation on Positive Train Control (PTC). He retired from the Federal Railroad Administration in 2010 after over 36 years there working on safety and policy initiatives. 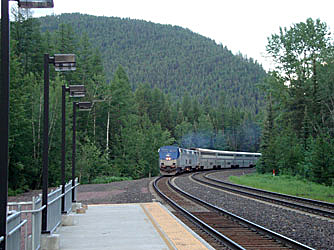 He sees PTC as relevant to the administration’s higher-speed rail initiatives, as well as to enabling railroads to make the most efficient use of their infrastructure. This is particularly true in light of the high cost of adding tracks and the difficulty or impossibility of doing so in many locations.

He agrees that the industry will not make the 2008 law's December 31, 2015 deadline, noting that one major railroad recently stated it will begin installing PTC in 2015. He recommended a three-year extension of the deadline, coupled with:

· A clear requirement to prevent rear-end collisions involving restricted speed, something that PTC as currently designed will not do.

· A requirement that FRA include additional lines with significant risk of PTC-preventable accidents, to be completed by around 2020.

· Prohibiting “judicial review of implementing regulations based on cost/benefit theories and quibbles about risk estimates.”

It seems likely that a serious effort will be made in Congress to change the 2015 deadline next year. NARP has consistently argued that “doing it right” is more important than meeting the (impossible) 2015 deadline, and opposed a five-year extension of the deadline others have proposed.

The main objectives of Positive Train Control are to prevent train-to-train collisions and to prevent derailments that happen when locomotive engineers fail to observe speed limits (such as at Back Bay, Boston, in December 1990).