The document also outlines a 10-year funding blueprint based on the American Jobs Act, providing a much-needed source of additional funding to address the investment backlog facing America’s transportation network.

“Rail Passengers applauds President Biden’s budget proposal—not just for the increase in funding for fiscal year 2022, but the multi-year vision for upgrading and expanding America’s passenger rail network,” said Jim Mathews, President and CEO of the Rail Passengers Association. “This country’s infrastructure gap has steadily grown over decades, and we won’t fix it in a single year. States will need the predictable and steady source of passenger rail funding outlined in this budget to get U.S. trains back on track.”

We analyzed the transportation section of the President’s budget to spotlight some of the key proposals and projects.

This figure would represent a 35 percent increase over FY 2021 Enacted levels. The White House says this will allow the railroad to accelerate track renewal and increase overhauls and refreshes of the existing passenger rail fleet. There is a $150 million set aside within NEC account to fund the replacement of the single-level passenger cars used on the Northeast Corridor, State-supported routes, and long-distance routes.

However, Amtrak has projected it will need $3.9 billion to keep the railroad running in the face of pandemic ridership and revenue losses. These are projections, of course, and could be subject to revision—but it would be a bad start to President Biden’s “railroad revolution” if the White House is forced to deal with another Amtrak crisis over potential service cuts and worker furloughs in the autumn.

The Biden Administration says it believes CRISI is well suited to meet the needs of the “U.S. freight rail network—with a particular emphasis on the capital needs of resource-constrained short line railroads—along with safety and congestion relief projects for both freight and intercity passenger rail.”

Interestingly, the Biden Administration made the decision to zero out funding for two existing rail grant programs—the Federal-State Partnership for Good Repair and Restoration and Enhancement grants—and pivot to PRIME grants, passed out of the U.S. House last summer as part of H.R. 2, but never enacted into law. It argues the program will “complement the corridor-wide investments and mega projects proposed for funding through the American Jobs Plan by advancing projects to improve reliability, reduce trip times, enhance service, and advance planning, engineering, and environmental analysis to maintain the pipeline of projects ready for funding.” We’re excited about a bigger share of funding going towards passenger rail projects, but this budget line item depends on the passage of PRIME as part of a future surface transportation reauthorization. 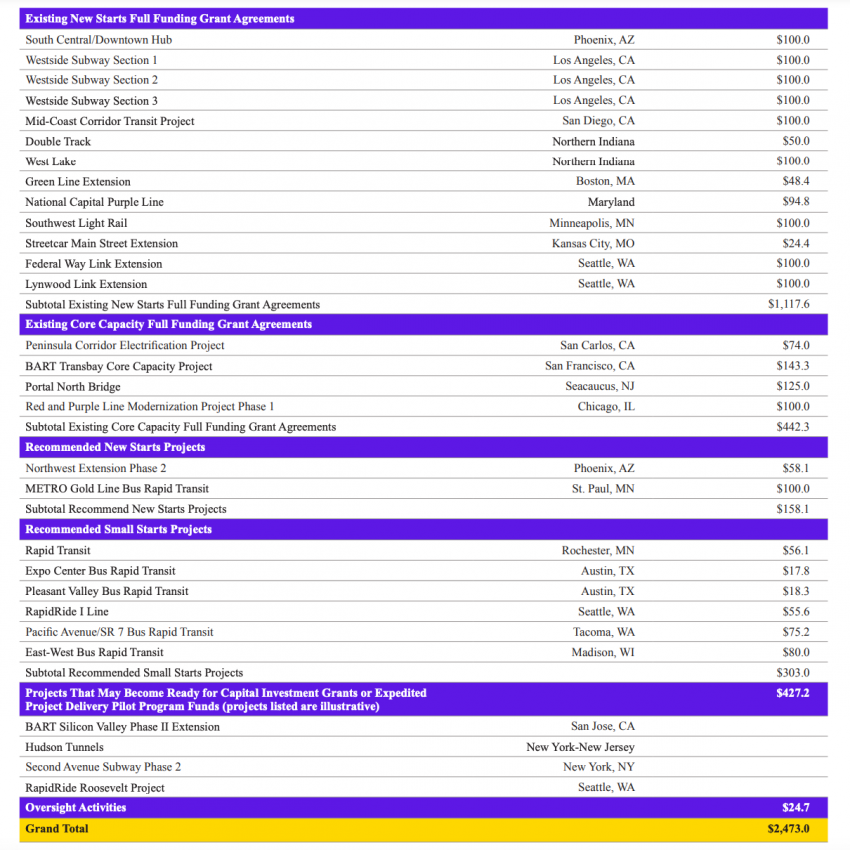 The White House budget proposal also lays out a 10-year blueprint for ramping up investment in passenger rail as part of the American Jobs Plan. Funding starts off low, presumably to allow states to ready a pipeline of projects. In subsequent years it dramatically ramps up levels, peaking in FY28 with $11.7 billion.

While the budget does include American Jobs Plan rail funding for FY22—$1.8 billion to modernize public transit and $1.6 billion to invest in passenger and freight rail—it’s unlikely that appropriators will deviate meaningfully from what authorizers have laid out in the FAST Act. That means the White House funding blueprint would have to be taken up by authorizers in the House Transportation & Infrastructure Committee and the Senate Commerce Committee. And in the Senate, at least, that requires bipartisan agreement over the shape of the programs and the funding levels.

With markups scheduled next week for both committees, we’ll soon know more about how the White Budget proposal landed in Congress.