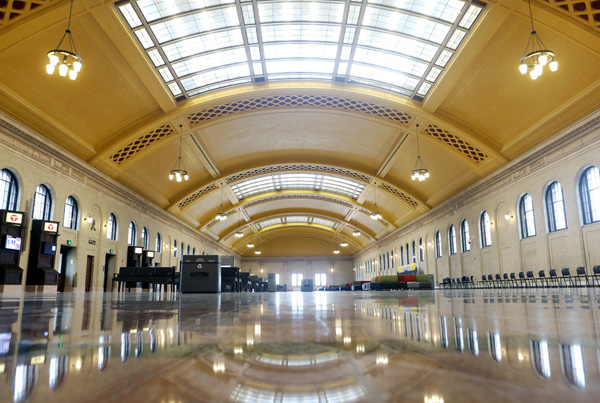 In a visit to St. Paul’s restored Union Depot, President Barack Obama outlined an ambitious $302 billion, 4-year investment plan for America’s roads, bridges, railways, and transit. $19 billion of that will go towards rail, with another $72 billion directed to transit.

The President was in St. Paul to celebrate the renovation of Union Depot, which returned intercity passenger trains back downtown after more than 30 years. The restoration occurred as part of the Transportation Investment Generating Economic Recovery (TIGER) grant program, which provides funding to projects of regional significance that generate positive economic development. Thanks to the TIGER program, Union Depot is being transformed from a dusty, overrun old building into a modern regional transit hub.

And while $600 million for intermodal projects is a pretty big deal, it was dwarfed by the $302 billion surface transportation plan, which includes a one-time infusion of $150 billion in revenue from corporate tax reform.

The President’s plan includes $19 billion in dedicated funding for rail programs. That would mean almost $5 billion each year for high performance passenger rail programs, with “a focus on improving the connections between key regional city pairs and high traffic corridors throughout the country.”

There’s reason to be cautious: this Congress hasn’t been active at the best of times, much less right before an election. But it’s an amazing thing when the President of the United States pushes for passenger trains to be included as part of a comprehensive transportation program. If enacted, it would mean predictable, sustainable levels of funding for trains, and that allows Amtrak and the states to plan, to buy new equipment, and to make much needed investments in critical infrastructure.

Expect more next week. But until then, rest assured NARP will be working to advance the rights of American passengers.