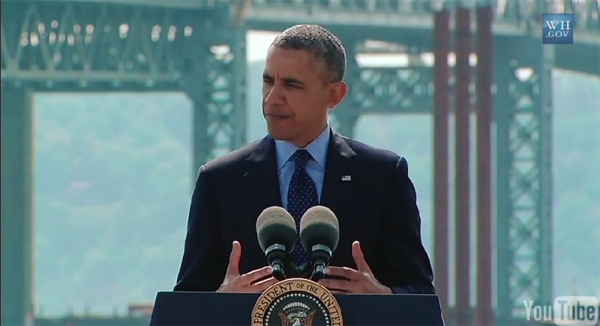 The Tappan Zee Bridge is emblematic of so much in the U.S. transportation network. Completed in 1955, it was built on the cheap with a designed lifespan of 50 years. It was also constructed at one of the widest points of the Hudson River—adding to the cost—to place it outside the Port Authority of New York and New Jersey’s jurisdiction and ensure that toll revenue would go the state of New York. It currently handles 138,000 vehicles per day, significantly more cars than it was designed to handle, and has been called one of the most decrepit and potentially dangerous bridges in the U.S. Slated to be decommissioned in 2016, the $4 billion replacement bridge has been intensely criticized for its lack of transit, eliciting a series of shrugs and evasions from planners.

The Tappan Zee Bridge’s story is one of idiosyncrasies, overlapping jurisdictions, political infighting, and short sightedness. But it is also one of perseverance and eventual success. So it is fitting that President Barack Obama chose the Tappan Zee as a backdrop for a speech warning America that its economic well-being is threatened by political inaction in the face of an infrastructure crisis. President Obama didn’t hold back in pushing for more investment in infrastructure, highlighting the importance of modern train service for a robust 21stCentury economy:

We shouldn’t watch the top-rated airports and seaports or the fastest rail lines or fastest Internet networks get built somewhere else—they need to be built right here in New York, right here in the United States. First-class infrastructure attracts first-class jobs. Business owners don’t want a crumbling road or a bridge because then they can’t move out their stuff, and their workers aren’t as productive because it’s harder for them to get to work. They want to set up shop where there’s high-speed rail and high-speed broadband, high-tech schools, self-healing power grids, new ports, tunnels. That allows them, when they make goods here in America, to move those goods out and sell them all around the world.

And here is the sad part: Rebuilding America, that shouldn’t be a partisan issue. My favorite President happens to have been a Republican -- a guy named Abraham Lincoln in my home state of Illinois. And it was Lincoln who committed to a railroad connecting East to West, even while he was struggling mightily to hold together North and South. It was a Republican, Dwight Eisenhower, who built the Interstate Highway System. It was Ronald Reagan who said that rebuilding our infrastructure is “an investment in tomorrow that we must make today.” Since when are the Republicans in Congress against Ronald Reagan?

But that’s part of the problem—we’ve gotten so partisan, everything is becoming political. They’re more interested in saying no because they’re worried that maybe they’d have to be at a bill signing with me than they are at actually doing the job that they know would be good for America. It’s time for folks to stop running around saying what’s wrong with America; roll up your sleeves and let’s get to work and help America rebuild. That’s what we should be doing.

Congress is currently pushing two transportation bills; the House is proposing cutting transit and passenger train funding to maintain level highway funding, while the Senate is proposing an all-around extension of current levels. Neither proposal will get this country where it needs to go, so let’s hope they can hear the sound of traffic on the Tappan Zee Bridge all the way down in Washington.