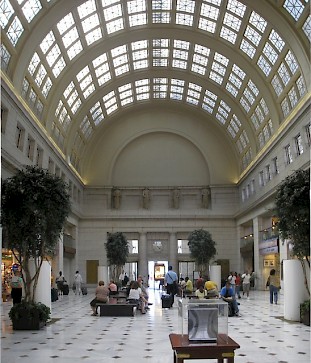 A “once in a lifetime opportunity.” This phrase was repeated multiple times by council members and witnesses during the Washington, D.C., City Council's Committee of the Whole hearing June 18 regarding the expansion of Washington Union Station. When the expansion is completed, it is estimated that Union Station will accommodate 70 million people per day (it currently accommodates around 30-40 million per day).

Along with this increase in those using the expanded Union Station comes the increase in the economic impact that will flow from the expansion. Jim Dinegar, president and CEO of Greater Washington Board of Trade, said simply the “Union Station expansion will remove congestion and make D.C. the center of commerce for the eastern seaboard.” Gallin Brooks, director of planning and economic development for the NoMa Business Improvement District, further stressed to the council the economic benefits of the station's expansion by referencing what has occurred at the NoMa station: “it generates $330 million each year, with a direct fiscal impact of $1 billion.”

However, before any expansion of Union Station can be done, the H Street bridge must be replaced. Along with the replacement of that bridge comes another hurdle that must be overcome: the design of the new Amtrak rail yard. Before any of the construction or designs to replace the H Street bridge come to fruition, Amtrak must submit their design for new rail yards, expected to be completed by December 2015.

When Amtrak’s new rail yard design plans are finalized, the new bridge can be built to specifically accommodate features of the design, decreasing the likelihood of more delays once work begins. When asked for a timeline on completion of the new bridge after Amtrak’s rail yard proposal was complete, D.C. Department of Transportation Director Leif Dormsjo said “12 months for solicitation for designs and contractors,” followed by “36 to 48 months of construction.” This means a possible full completion date of the bridge by 2020, at which time the Union Station expansion can truly begin.

This expansion will be completed through three phases. First is a new rail yard design by Amtrak, expansion of passenger concourses, and the replacement of the H Street bridge. The second phase consists of expanding the east side tracks, run-through tracks and a new bus facility. The third and final phase will see the expansion of the west side tracks, a garage area, the lower and central level concourses and new development areas. Unfortunately, the timeline for when these three phases will come together remain indistinct, and only that elements of phase one are currently underway.

With the overwhelming support for Union Station’s expansion that is stemming from the D.C. Council’s Committee of the Whole, and the efforts by those involved, the eventual expansion of Union Station and this “once in a lifetime opportunity” will surely be a boon for not only the people who travel to the nation’s capital through Union Station, but for the men and women who and commute in D.C.