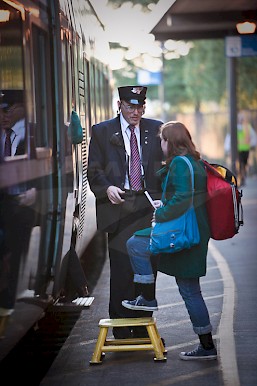 Photographer: Jason Berg for Amtrak. From the Amtrak Corporate Collection

If you’ve been paying attention, you knew it was coming. Anytime Amtrak is in the national news, a political spectacle is sure to follow. Once the political-media apparatus geared up in response to the recent Amtrak derailment north of Philadelphia, there was nothing that was going to stop this particular circus from coming to town; not the tragic nature of the accident, nor the unambiguous statements by the National Transportation Safety Board’s lead investigator saying that decades-old Positive Train Control (PTC) technology would likely have prevented this horrible accident. The bare facts of Amtrak’s relationship to the rest of the national transportation network are no longer sufficient to transcend its role as a political Rorschach test.

It is a perpetual wonder for many passenger advocates that Amtrak—which, it’s worth noting accounts for $1.4 billion of the U.S. government’s roughly $4 trillion budget, or 0.03 percent—should serve as such a reliable whipping boy for the nation’s deficit hawks. It’s become almost a rite of passage for Republican presidential candidates to establish their conservative bona fides by calling out Amtrak as an instance of government inhabiting spheres it just shouldn’t be. So it was no surprise when the usual suspects, sensing the railroad’s vulnerability, began to circle this past week.

What is surprising is the spectacularly tone-deaf manner in which some anti-rail voices have sought to shape the narrative following this tragedy, and the lengths to which they’ve gone to prevent the American traveling public from connecting the dots. The stridency with which they made their case was arguably made necessary following a tremendously ill-considered decision by the House Appropriations Committee to slash Amtrak’s budget by $267 million. That has forced leading members of the House GOP to publicly defend the cuts mere hours after the derailment.

Ryan's statements look positively apologetic, however, when compared with those made by House Speaker John Boehner (R-Ohio).

“Are you really going to ask such a stupid question? Listen, you know, [Democrats] started this yesterday, it’s all about funding; it’s all about funding,” fumed Boehner at a May 14 press conference. “Well, obviously it’s not about funding. The train was going twice the speed limit. Adequate funds are there; no money’s been cut from rail safety and the House passed a bill earlier this spring to reauthorize Amtrak, and authorize a lot of these programs. And it’s hard for me to imagine that people take the bait on some of the nonsense that gets spewed around here.”

The facts of the case, as revealed by NTSB Chairman Robert Sumwalt on May 13, did not support Boehner’s statements.

“Had [PTC] been installed on this section of track, this accident would not have occurred,” said Sumwalt. The NTSB has been recommending that PTC be installed across the rail network since the early 1990s.

Fortunately, the senselessness of the accident has mobilized a broader-than-usual spectrum of transportation and media commentators. The Atlantic magazine’s CityLab blog immediately set about debunking the money-isn’t-germane crowd by unearthing a 2012 Federal Railroad Administration (FRA) report on PTC implementation, which was mandated under the Rail Safety Improvement Act (RSIA) of 2009. The report unambiguously stated:

“When the RSIA was passed in 2008, the industry was operating under the premise that a new, long-term reauthorization bill would increase Federal capital support for commuter rail systems through FTA grants or that additional Federal funding would be made available to assist in the implementation of PTC.

Others have pointed out that the Obama Administration has repeatedly requested additional funding for PTC implementation—requests that were rejected by Congress. As the facts emerge, you begin to see the motivation behind these infrastructure deniers: they’ve deliberately starved our transportation system of federal funds, and with the cracks are starting to show, they want desperately to deny cause-and-effect to ensure that they’re not saddled with responsibility for the real-world consequences of their political philosophy.

NARP has been pushing back, appearing on national news programs on television and radio to get as much information out as possible about why this accident was avoidable. By saddling the Northeast Corridor with a $52 billion state-of-good repair backlog over the past few decades, Congress has put Amtrak into a situation where daily operation of the corridor requires constant triage. Is PTC more important than new Hudson River tunnels? Is it better to order new equipment or fix a swing-bridge that frequently shuts down the entire corridor? Congress has made it much harder on our nation’s rail providers—intercity, commuter, and transit—to provide a safe and reliable service for travelers.

No one did a better job of explaining the source of this curious apathy toward passenger rail last week than the New Yorker’s Adam Gopnik:

[T]he will to abandon the public way is not some failure of understanding, or some nearsighted omission by shortsighted politicians. It is part of a coherent ideological project. As I wrote a few years ago, in a piece on the literature of American declinism, “The reason we don’t have beautiful new airports and efficient bullet trains is not that we have inadvertently stumbled upon stumbling blocks; it’s that there are considerable numbers of Americans for whom these things are simply symbols of a feared central government, and who would, when they travel, rather sweat in squalor than surrender the money to build a better terminal.” The ideological rigor of this idea, as absolute in its way as the ancient Soviet conviction that any entering wedge of free enterprise would lead to the destruction of the Soviet state, is as instructive as it is astonishing. And it is part of the folly of American “centrism” not to recognize that the failure to run trains where we need them is made from conviction, not from ignorance.
…

The late Tony Judt, who was hardly anyone’s idea of a leftist softy, devoted much of his last, heroic work, written in conditions of near-impossible personal suffering, to the subject of … trains: trains as symbols of the public good, trains as a triumph of the liberal imagination, trains as the “symbol and symptom of modernity,” and modernity at its best. “The railways were the necessary and natural accompaniment to the emergence of civil society,” he wrote. “They are a collective project for individual benefit … something that the market cannot accomplish, except, on its own account of itself, by happy inadvertence. … If we lose the railways we shall not just have lost a valuable practical asset. We shall have acknowledged that we have forgotten how to live collectively.”

As if on cue, the Wall Street Journal released an op-ed that sought to embody the anti-rail mindset described by Gopnik. The WSJ once again dusted off the argument that the national network was an albatross around Amtrak’s neck. They went further, however, and said that since the Northeast states were rich enough to address the NEC’s investment needs without federal help, they should receive no federal support in keeping the line running.

NARP President and CEO Jim Mathews submitted a response to the WSJ, pointing out the irrational underpinning for a transportation policy where rails, roads and airports all held to unequal standards:

The Highway Trust Fund has been insolvent for almost a decade, forcing Congress to inject general funds endlessly to subsidize these shortfalls—some $53 billion since 2008, more than Amtrak has received in its entire 40-year history. With Congress proposing to provide $10 billion more to keep the fund solvent, I’d expect to see the Wall Street Journal’s editorial board call for an end to this unprofitable federal program—for consistency’s sake, if nothing else.

You argue the urban-rural usage divide justifies eliminating the national passenger-rail network to focus solely on one urbanized corridor. Since California’s highway system saw well over 216 billion vehicle miles in 2013 compared with Idaho’s measly 7.7 billion vehicle miles, I presume you’ll soon propose to shore up our interstates by cutting Idaho’s funding to shore up the states where we are certain the highways will be used most.