Passenger Rail Is the Foundation for the Largest Private Development Project in U.S. History 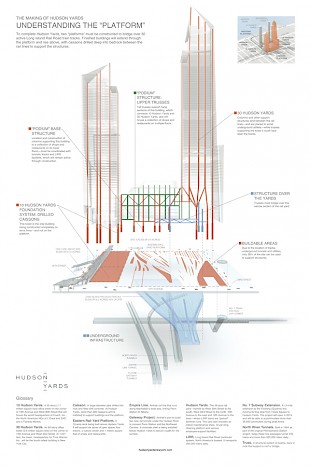 The foundation for the Hudson Yards, the largest private development project in U.S. history, is starting to take shape. In a fascinating inside look, the website Gizmodo looks at why the foundation of this megaproject may actually be its most interesting part:

West Side Yard, a sunken rail yard wedged above the High Line and two blocks away from Penn Station, is a critical nerve center in NYC's transit system: A 26-acre depot that serves overflow Long Island Railroad trains during rush hour, with 30 tracks and space for storage and maintenance, too. It's so important that it's been spared from the rush to redevelop the West Side in the wake of the High Line—though that's not to say its creators didn't foresee it.

When the rail yard opened in the 1980s, its engineers were already imagining the day when a hungry developer would pave over it. So they left a small gap that runs around the edges of the yard—just enough space for structural members to be laid down without interrupting traffic. Think of it as an insurance plan for future city-builders.

Now, those builders have arrived—and they're building something far bigger than the planners of the 1980s probably ever imagined: Hudson Yards, a tightly-packed puzzle of four skyscrapers and a cadre of other towers that represent the largest private development project in the entire history of the US, and the largest development in NYC since Rockefeller Center.

You can read the entire piece here, which delves into the specifics of how engineers are enabling this massive structure to be built on top of one of the busiest rail yards in the world.

The Hudson Yards is another instance of building on the foresight of previous generations, one that begs the question: will future generations be able to say the same about us? The U.S. is failing to invest in its infrastructure, and the result is a $3.6 trillion backlog. One of the most critical infrastructure projects in the northeast U.S. are the new rail tunnels Amtrak is trying to build under the Hudson River into Penn Station. Once built, they will expand capacity into New York City and throughout the Northeast Corridor. Yesterday saw Amtrak ask for a dedicated multi-year source of funding to allow the company to tackle projects exactly like the Hudson River rail tunnels. Its also fair to ask for a portion of the massive amounts of money flowing into this real estate development could be used to improve the underlying public infrastructure in a Tax Increment Financing (TIF)deal.

But whether it’s TIF or public funding, America needs to get moving. It’d be a shame if we became so focused on erecting these mega-buildings that we forgot to maintain the corridors that allow people to access them.