NARP member Alfred Twu of Berkeley, CA designed a map of a possible future American passenger train network, with ten high-speed trunk lines supplemented by an expanded network of conventional passenger trains. It is partially based on NARP's own 40-year Grid and Gateway Vision map, released in 2007. 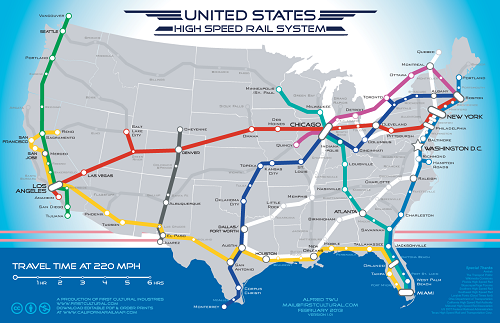 The map invites you to imagine the distance between points not in terms of miles, but in terms of travel time by rail, with one centimeter on the map roughly equaling one hour of travel time. This enticing illustration went viral on Facebook and Twitter, and thus garnered mainstream media coverage.

Now, a White House petition calling on the federal government to “Fund a high speed rail system that runs coast-to-coast and connects all metropolitan areas,” based on Twu’s map, has garnered (as of Thursday afternoon) just over 41,500 signatures – many more than most petitions are able to muster. If it amasses just under 58,500 more, it will get an official White House response.

Regardless of your opinion on the feasibility of coast-to-coast high-speed rail, we encourage you to sign the petition (which requires registering yourself on the White House website, free of charge) to show your support for the idea of robust investment in passenger rail – because we cannot afford not to make such investment.

The 20th century had the Interstate Highway System, let the 21st see a national network of high speed rail!

Create a funding source (energy taxes? US Savings Bonds sold to citizens? Crowdfunding shares in a newly chartered corporation?) and a multi-decade plan.

Build 220-mph trunk lines with nonstop expresses between major cities and high speed regional service for other places in between. Link up to less populated areas with 110-mph service.