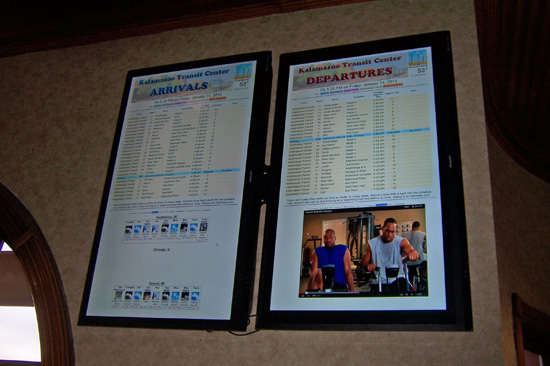 In another instance of NARP members working to improve the experience of riding trains, Michiganmembers of NARP’s Council of Representatives have worked to install an electronic departure and arrival board for the Kalamazoo Transportation Center.

The board—a repurposed flat screen television—is part of a pilot program that NARP hopes to expand to other cities:

The city ofKalamazoois the first city to have the boards as part of the project organized by the National Association of Railroad Passengers, said John DeLora, vice chair of the association.

TheKalamazooTransportationCenteris also the first center in the country to have multiple transportation schedules on one board, DeLora said. The boards operate off of city computer data.

Funding for the boards was made possible through a $25,000 grant from the Sally Mead Hands Foundation, which promotes "green transportation."

This is the first such board in theU.S.for intermodal transportation that includes inner-city transportation. It cost about $10,000 to do the research to create the boards. The hardware was about $500.

"It would have been a million-dollar project in the 70s," DeLora said.

DeLora said he hopes to expand to six to eight other stations inMichigan,IllinoisandWisconsin. The next station will beBattle Creek, he said.

You can read the fully story at MLive.