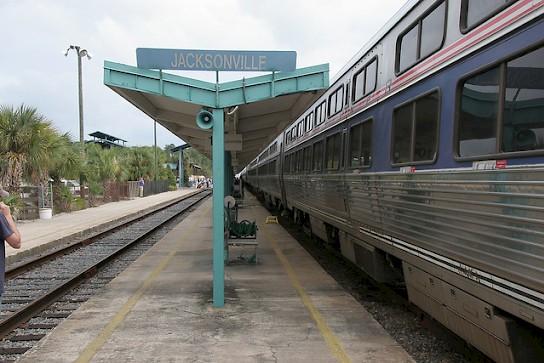 The Silver Star is testing selling sleeping car accommodations on the line between New York and Miami at a lower price by not including dining car meals-- however, more than just an unbundling of services, Amtrak has eliminated the dining car entirely. Amtrak will run this test through January 31, 2016, to evaluate the operational cost savings and customer satisfaction of operating an overnight train at a lower fare and without a dining car. On July 13th NARP Board Chairman Robert Stewart rode Amtrak's Silver Star. Below is Stewart's report.

Loss of a Dining Car

Most of the sleeping car passengers I talked to knew of the change, but were only contacted about it two weeks ago. Some had purchased tickets at the old price, but were not offered any adjustment in fares. Except for two folks in the sleeper going short distances (West Palm Beach to Orlando and Raleigh to DC), all passengers I talked to were not happy about the loss of the diner. Two said they had dietary restrictions that precluded them from eating lounge car food. A gentleman going from West Palm Beach to Orlando said he came south in coach, but it was so filthy he upgraded to a sleeper on the return trip. The Raleigh to D.C. woman did not know there wasn’t any diner or food service provided—she had not been notified. Most said they would be willing to pay more to have a diner on the train.

Both sleeper car attendants said about 80 percent of the customers complained to them about the lack of a diner. They have not seen an increase in their serving passengers in their rooms, but have seen a decrease in tips.

The Cafe Lounge car attendant said he has not yet run out of supplies on a run, but the lines can be long, as I saw around 8:00 a.m. The choice for dinner was very limited: two sandwiches, burgers, hot dogs, chicken tenders and pizza. There were no salads or soups. On Tuesday for lunch, he was out of a number of items on the menu. People were confused as to where to line up for food orders. There was almost a fight among passengers on who would be served next, until the cafe lounge car attendant told them where to line up.

This test trial on the Silver Star is upsetting many passengers, who will share their story with others and may not ride Amtrak again. I suggest that in light of the strong negative response, Amtrak cuts back the study period from seven months to three months, which will give the company fewer unhappy customers. I also think a letter or email needs to go out to all passengers who rode sleepers on the Star during the trial period explaining to them why it was done, thanking them for their patience, and telling them when full dining service has been restored.

Amtrak did come back to me on the highlighted section and said that all passengers had been contacted that bought before the fare change and had been given a reduction which conflicts with what I was told on the train.

On Monday, July 13th I boarded #92 at the Tampa station. All tickets were scanned before walking to platform and all passengers were on the platform before the train arrived. We were told to stand behind a long temporary fence until the train arrived. It was a very efficient station operation.

The train consisted of two engines, baggage, two sleepers, cafe lounge, and four coaches. About three miles outside of Tampa station, we stopped while the conductor did a ground inspection of the train, which they said was standard procedure but was new to me. It took about 12 minutes, but double and triple station stops really hurt time keeping. We spent 13 minutes in DeLand, Florida, seven minutes in Cary, North Carolina, and nine minutes in Raleigh, North Carolina. We departed Raleigh at 9:15, 30 minutes late. We pulled into Rocky Mount, North Carolina, on outside track with no full platform--just two short walkways over the tracks. We had to make three stops (baggage, sleepers, and coaches) and it took 10 minutes.

We lost 35 minutes between Richmond, Virginia, and Alexandria, Virginia, due to slow running. We arrived at Alexandria at 3:42 p.m. -- one hour and 38 minutes late. The conductor said we would have a quick run into Washington Union Station, but it took 45 minutes due to a VRE train breakdown and construction on the line. Our arrival at Union Station was at 4:35 p.m., just under two hours late.