An introductory course in economics will teach you that one of several conditions that must be met to have a properly functioning market, where prices for goods and services are established based on the optimal intersection of supply and demand, is “perfect” information. Both buyer and seller must have access to all the relevant information about the product or service in order to establish a fair price. But too often when people make decisions, information is imperfect, or unavailable.

Take, for example, deciding where to live. An oft-overlooked piece of information is the cost of transportation between a given home and one’s places of work, shopping and entertainment—a cost category that often exceeds 25% of a household’s budget. Thus, people who buy homes that appear to fit within their means too often discover that they struggle to pay the mortgage because they’re spending so much on gas and the other costs of owning one or more cars to get where they need to go, and other transportation choices—public transit, biking, and walking—are either extremely limited, nonexistent, or too dangerous.

That’s why today’s unveiling of a new online information portal, a joint service of the US Department of Transportation and the US Department of Housing and Urban Development, has the potential to reshape our communities for the better. The Location Affordability Portal will improve decision-making not just by individual prospective homebuyers (and renters as well), but also of federal, state and local government agencies, banks, real estate firms, transportation planners and others, because its wealth of data will be available publicly free of charge. These data, which federal agencies already collect but haven’t yet made public together in one place, include a Transportation Cost Calculator (showing how much it would cost a given family to drive a given distance every day versus taking public transportation, walking or biking) and an average cost of housing in the region for eight different household profiles, adjustable by income level, household size, and number of commuters, among other factors.

As people begin to realize how much money they can save by moving into an area with a well-developed transit network, even though home prices and rents are likely to be higher in these in-demand areas, more local planners and developers will see the wisdom of following the lead of parts of the country that have invested in rail transit, not just within cities, but connecting cities to smaller towns. A hint at just how much latent demand is out there for more robust train and transit service comes from yesterday’s Raleigh News & Observer. File sharing and storage company Citrix is looking to expand its Raleigh offices, and has chosen to take space within blocks of the city’s future Union Station, which will bring Amtrak together with intercity and local buses plus planned light rail and commuter rail routes.

Citrix Vice President Jesse Lipson explains that the employees he seeks to hire are members of the “creative class” who are “interested in things like living close to work, walking to work, biking to work, taking the bus – and taking trains a lot more than most people do.” He has trouble attracting talent from the Raleigh area as they fear having to brave traffic every day, but the traffic’s lightness in comparison with the Northeast and California attracts employees to move from those areas. 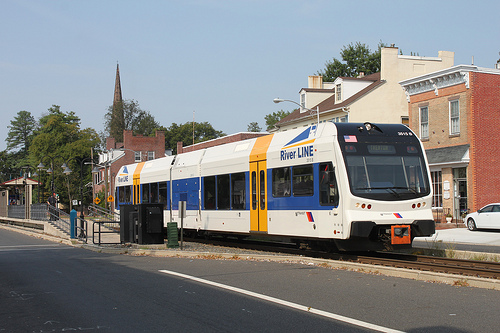 One place that is ahead of the curve is the cities and towns served by the River Line, which hugs New Jersey’s bank of the Delaware River between Trenton and Camden (across from Philadelphia). Four years ago, the State of New Jersey’s investment brought daily, twice-hourly diesel light rail service to an existing freight rail line connecting the endpoint cities with eleven smaller communities in between. Even though the River Line loses $24.4 million per year, discontinuation is not a topic of discussion because it pays back those costs and more to the communities by cutting traffic congestion and spurring the construction of desirable, transit-accessible places to live. From an editorial in Sunday’s Times of Trenton:

Major development projects have broken ground near River Line stops in Trenton, Bordentown and Florence, as well as Camden and Cinnaminson, Hammond reported, and local leaders credit the line with making such growth possible.

The River Line has attracted small businesses all along its 34.5 miles not just because it makes it easy for customers to get to and from them, but also because they can ship freight on the same rails (which freight trains use during the overnight hours). As planners and business leaders in other parts of the country begin to realize the benefits of such rail investment thanks to the information in the Location Affordability Portal, they will push to transform rail routes the same way the River Line, with its freight partnership, is reviving the region it serves.

Photo by Flickr.com user Joseph A.