More and more are climbing aboard

Every time I travel Amtrak, I continue to be struck by how crowded the trains are these days. Just this past weekend, I traveled from Washington, DC to Rhinebeck, NY to visit my father and stepmother. I took the 4:02 PM Northeast Regional from DC to New York. On this train, I had been accustomed to grabbing a seat in the middle of the last Amfleet coach on the 8-car train and having the two seats to myself in an uncrowded car. On previous trips, many of my fellow riders in the rear car had been Amtrak employees. However, this past Friday, the rear car quickly filled up as others boarding in DC moved back as cars farther ahead filled up. I then had a seatmate from Baltimore to New York as there were only a handful of empty seats for that part of the trip, though many seats changed hands at Philadelphia. 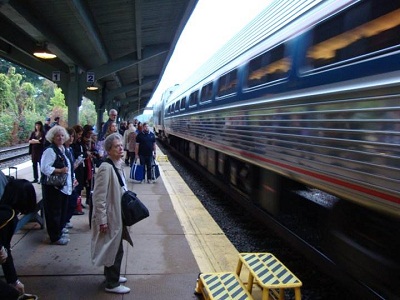 My connecting 8:50 PM Empire Service train from New York to Rhinecliff was a little more than half full, and I had two seats to myself for the entire ride. But on my return trip from Rhinecliff on Sunday, the single platform there was as crowded as I had ever seen it for the 5:01 PM departure on a warm, overcast early October afternoon. I walked all the way forward through the four coaches and had to settle for an aisle seat next to a young woman who was reluctant to move her large purse off of the seat next to her. The train was indeed sold out, and every seat in my car was occupied from Rhinecliff all the way to New York Penn Station.

For my final leg back to DC, I had used one of my Amtrak Guest Rewards free one-class upgrade coupons to upgrade to First Class on the 8:00 PMAcela Express. On my previous First Class trips (all thanks to upgrade coupons), usually early or late in the day on weekends, the First Class car had been less than half full, and I had taken a two-person table to myself. However, when I boarded this time, several seats were taken by passengers continuing their trips from farther northeast, so I took one of the standard single seats. Sure enough, the First Class car nearly filled up, and remained so until about 12 passengers disembarked at Philadelphia.

The continually growing popularity of train travel became further evident when I was planning a trip to New York for the first weekend of December—two whole months away. For Northeast Regionals going from DC to New York that Friday evening and returning to DC that Sunday afternoon, the lowest fare available was $145.00—one way! That’s $47 more than one would pay for the round-trip at the lowest fare. And theAcelas, which obviously had not yet sold as many seats as the Regionals, were only $7 more than theRegionals one-way. So, not having much flexibility in my travel time, I opted for the Acela round-trip.

And it’s not just on the Northeast Corridor. The New York-New Orleans Crescent has been sold out each of the last several times I’ve ridden it between DC and Greensboro, NC—not just around holidays—and the New York-Charlotte Carolinian nearly so. For this weekend, to use one example, Friday night’s Lake Shore Limited from New York to Chicago is already sold out, seats on the Washington-Chicago Capitol Limitedare going fast.

With a public continuing to feel the sting of driving and flying in the pocketbook and dealing with continued security hassles at airports, it’s little wonder so many are turning to trains. Amtrak lacks the resources to meet this surging demand without charging fares as high as the market will bear. Getting Amtrak the reliable and sufficient capital required to respond to the public’s preferences remains NARP’s central charge.

Passengers at Rhinecliff ready to board the 5:01 PM train to New York City. Photo by Malcolm Kenton.