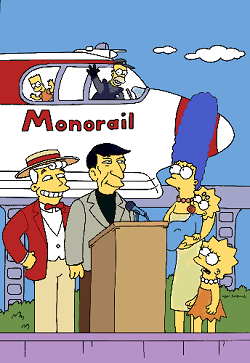 Fans of the long-running FOX series The Simpsons might remember a 1993 episode where the citizens of Springfield, swayed by a clever salesman’s presentation, invest the town’s treasury in a monorail service with hilariously disastrous results. While we at NARP don’t pretend that a cartoon can possibly encapsulate the nuances of transportation policy debates, recent events in Tennessee might force us to reconsider.

The Nashville urban area is one of the fastest growing areas of the state. Planners expect that the population of Rutherford County, which includes many Nashville suburbs, will more than double by 2025. Current transportation capacity is insufficient to meet present demand, and can in no way handled the massive increases forecasted in the years to come. Interstate 24 between Murfreesboro and Nashville is one of the most congested highways in the entire state; with no viable public transportation alternatives, commuters must face gridlock each and every day.

Legislators in Nashville are sensitive to this problem, and many solutions have been proposed. One particular proposal, offered by Republican State Senator Bill Ketron, calls for the construction of a monorail in the median of Interstate 24 between Nashville and Murfreesboro. Ketron argues that a monorail represents a sensible solution to the problem, as it would be built on already publicly-owned land. This approach avoids some of the problems encountered by California high-speed rail, which has faced opposition due to the need to purchase land for the projected route. Furthermore, according to the Senator’s estimates, the monorail would be able to handle up to 55,000 passengers a day, potentially taking thousands of cars off of area roads.

However, the proposed monorail is neither the best nor most practical solution to the Nashville region’s woes. Costs alone will likely deter action; Ketron noted that the pricetag could top out at just under $1 billion dollars. Although he is optimistic that the state would likely be able to petition for federal funds to complete the project, such assistance is by no means certain. Tight budgets mean that every instance of federal investment in transportation projects will be heavily scrutinized, and it isn’t clear that the monorail would pass such scrutiny.

A monorail cannot easily integrate with existing modes of transportation, as Michael Cass explained in his article. Operating on unique infrastructure, monorails do not lend themselves to using common stations and other intermodal facilities similar to those used across the country. This need for unique infrastructure also means that any monorail station would likely be located far from commuters’ workplaces and homes, requiring further investment in public transportation simply to get people to the monorail.

In the face of these cost and technical objections, why would the legislature be so interested in the monorail? It’s the same sort of impetus that’s driven public interest in Elon Musk’s Hyperloop proposal: the “rule of cool”. Monorails create an impression of “fast” and “modern” service, contrasting with the unfair typical impression of conventional trains as “slow” and “antiquated”.

Just as we pointed out to you with a comparison of Hyperloop to blended California high speed rail, the Nashville monorail is also an example of the “rule of cool” trumping practical considerations. Tennesseans need not look to a monorail to provide transportation solutions, when they already have viable commuter rail service. In 2006, the Tennessee Department of Transportation opened the Music City Star between Nashville and Lebanon. Envisioned as a trial project for the viability of commuter rail in the greater Nashville area, the Music City Star has proven popular with its users and has served as a catalyst forregional transit-oriented development. And, unlike the monorail, commuter rail services use existing infrastructure. Tennessee’s Department of Transportation has envisioned an extension to Murfreesboro as part of improved Music City Star service that would operate on extant CSX tracks. Commuter rail service to Murfreesboro would thus cost only a fraction of what the proposed monorail would.

We certainly applaud Senator Ketron’s interest in improved transportation, and we wish him success in his fight for more and better transportation choices. But we would encourage him to consider that the answer to Nashville’s traffic woes rides on two existing rails, not one yet to be built.