Last August, I was one of 23 very fortunate individuals who each raised $5,000 through online crowd funding to participate in the inaugural journey of the Millennial Trains Project. This was the first in what should become a series of such journeys, occurring every six months or so, that use a transcontinental train ride as a vehicle to inspire creativity, entrepreneurship, civic engagement and principled problem solving amongst members of the Millennial generation (those currently in their late teens, twenties and early thirties). The Project is founded on the idea that journeys build leaders, and that train journeys—because they allow for reflection, facilitate community, and offer transregional perspectives—are uniquely suited for fostering the kind of leadership that America and the world need to face the challenges of our time. 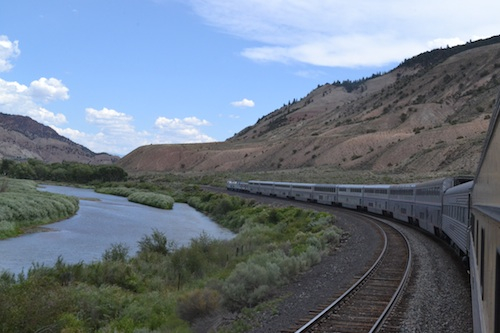 The August journey was a one-of-a-kind rolling idea lab, where participants with a passion for solving major social problems conversed throughout the day and long into the night. They bounced ideas off of on-board mentors with track records of success in a variety of fields, while taking time to enjoy and contemplate the intimate glimpse of the American landscape—wilderness, countryside, small town, suburb and inner city—that only train travel can provide. They stopped for at least 24 hours in each of seven cities, each meeting with different local change makers in pursuit of his or her own project, then getting together at the end of the day to share their experiences and learn from each other. They then returned to their sleeping cars, which served as a rolling hotel the entire journey.

The Project is planning its next journey for March 2014, and Millennials wishing to participate can start their crowd-funding campaigns now. This journey will bring the energy and thoughtfulness of its participants to a string of new cities. Perhaps most importantly for train advocates, it will follow a route between St. Louis and Florida that doesn’t currently have regular passenger train service and stop in two cities that lack Amtrak service: Louisville, which has been without a passenger train since the Chicago-Louisville Kentucky Cardinal was axed in 2003, and Chattanooga, which lost its last regular passenger train in 1970. But each of the cities the tour stops in, from Los Angeles to Miami, have far less train service than they deserve. Cities the size of Albuquerque, Kansas City, Atlanta and Miami would have multiple intercity train departures each hour in most European and Asian countries, yet each has no more than three daily departures.

In addition, the private railcars carrying the Millennial Trains Project participants will travel the threatened route of Amtrak’s Southwest Chief between Albuquerque and central Kansas through southeastern Colorado. NARP and our partners in the region are working hard to get the three states, Amtrak and track owner BNSF Railway to commit the funds necessary to maintain this section—which has little to no freight service—to passenger standards, thus maintaining the reliability of the fastest train between Chicago and the West Coast and preserving service to rural communities that depend on this link to larger metro areas and the rest of the country.

Local elected officials and leaders of the business and nonprofit communities in each of these cities will greet the train and welcome its passengers because they realize that the cities that attract the most talented, enterprising young people will be the ones whose economies and civic infrastructure are healthiest and most dynamic in the 21st century. But these community movers and shakers should also realize that part of what will attract Millennials is the very vehicle that brought this group to town. As a partner of the Millennial Trains Project, NARP will be there to encourage these leaders to work together to make investments in the passenger rail and transit infrastructure, and pressure state and federal legislators to do the same. These are the investments that will make these communities more desirable places to live—places with vibrant, walkable neighborhoods, commercial centers and college campuses connected by rail transit, with intercity trains as the lifeblood of thriving regions, and ultimately the nation.

It is evident that communities with more robust rail transit systems and better intercity train connections are attracting more young professionals than those without such amenities. But the Millennial Trains Project also demonstrates the value of the experience that passenger trains offer their riders. Trains are both builders of places, and places in and of themselves—the kind of places that foster collaboration and creativity; the kind America needs more of. The Project’s visit to cities like Louisville and Chattanooga should inspire their boosters to clamor for trains’ return to town, and promoters of Albuquerque, Kansas City and Atlanta should be petitioning for more frequent service and new connections.