Amtrak's entry into leveraging its properties for additional revenue begins with a fanfare of private industry interest, and therefore a solid showing of the economic value passenger trains have on the communities they serve 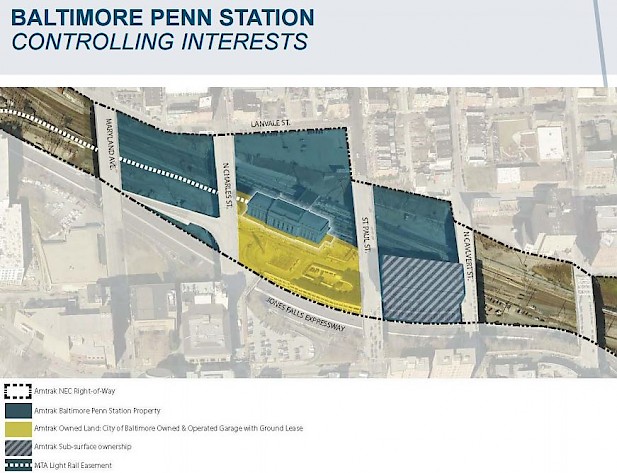 The re-development of Baltimore Penn Station and its adjacent vacant railway owned properties is a missing and obvious project, that exact sentiment being expounded upon in the recent press release on the topic. To those keeping track of the state of the industry, this can hardly been seen as a surprise, given Penn's unoccupied acres of otherwise urban space, and three million yearly passengers. Certainly, Amtrak's recent zeal for similar projects in Chicago, New York, Philadelphia, and Washington D.C. also factor here. Indeed, for the industry, land development is a widespread trend and a return to form. It's what passenger railways of all scopes have always done well, and something that Amtrak sagaciously plans to turn into a permanent source of revenue.

What was interesting about this event wasn't so much why it was happening, but how. This was Amtrak's first so-called "Industry Day" where diverse engineering, development, and architecture firms came together to gather information about the project as it moves forward. The turnout was good, as I was in the room perhaps with over a hundred such representatives. Significantly, all attendees are listed on the project website (nec.amtrak.com) in the wake of the meeting. This has the smack of transparency and due process, but there is something else in this small fact as well. Showing overwhelming interest from private companies and developers over such a project is a gauge of Amtrak's direct potential economic impact on a given place where it has significant service. I would estimate that the list alone will have some political value.

The attendance is further remarkable because the ask is big: Penn Station needs approximately seventy million dollars to bring it up to a state of good repair alone, not to mention the intricacies of developing the so-called "overbuilding" to bridge the Corridor for three blocks on the North side of the station. Amtrak is asking for help with it all, specifying a phased project that will be able to fund its own expansions.

Amtrak is also visualizing this process in a remarkable way. The presentation slideshow (worth a look) emphasizes a coordinated approach to value enhancement of their latent properties. Rina Cutler, Amtrak's Senior Director for Major Stations Planning & Development, was brought on a scant 15 months ago, and the shift in perspective at Amtrak surrounding these properties is perhaps only three years old at most. Despite the short tenure, the approach is appropriately holistic. One of the slides explicitly shows a "prior" approach to Amtrak's property asset management, with value realization being totally disassociated with operations, as if left to chance. Now, railroad operations forms the core, with direct and indirect value capture emanating directly from it: 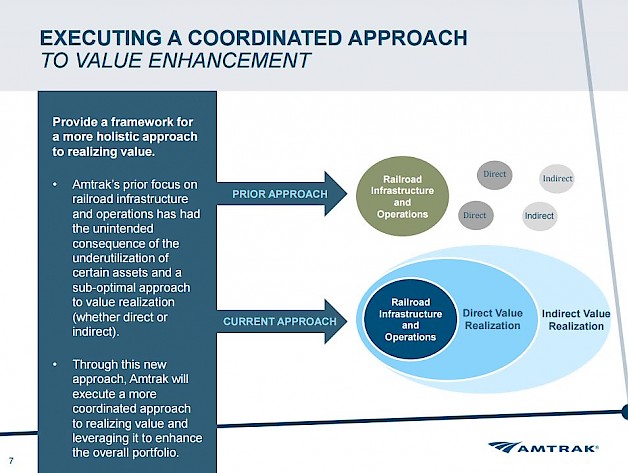 I was glad to hear many times over that Amtrak is first and foremost a railway. They spoke of increasing railroad capacity, and of developers allowing for that eventuality. All too often in such large projects, developers and transit agencies work in silos and end up prohibiting inherent symbiotic potential. For the development to be truly successful, the passenger facility must be successful and visa versa. However, there are many examples where this has not been realized: too many examples of light rail lines placed across a sea of parking from shopping malls come to mind. Even Denver's otherwise fabulous Union Station project was a casualty of this: the project was executed in a way that prohibits building additional rail capacity at the dawn of the city's commuter rail system. By putting its foot down about prioritizing railroad operations, Amtrak is setting the tone for which such symbiosis may have a long term chance.

Additionally, there were three stated values outside of the presentation intended to inform potential projects, that may not be mentioned elsewhere:

2. Community (Amtrak realizes that input must be taken for such projects to proceed with minimal controversy (and may be rewarded with a built-in constituency if successful-- "station as the city's living room" was a recurring theme))

3. Design ("we're not going to allow ugly stuff to get built. These are legacy projects")

They seem intent on doing this right. The RFQ is out this month, with the RFP coming this winter, after which we'll hopefully see some diverse competing visions for the project.