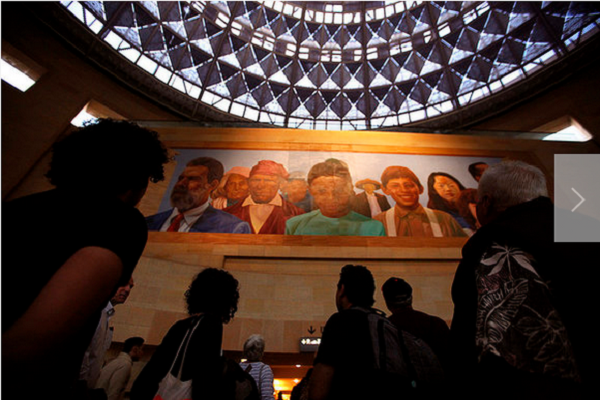 Photo courtesy of the LA Times

With most cities, transit passengers learn the rules of navigating the systems—both written and unwritten—the hard way. Stand on the left side of the escalator in D.C.’s Metro and you’ll hear about it from other passengers. Don’t move your bag from an adjacent seat in New York City’s subway for another passenger looking to sit down at your own risk.

But in Los Angeles, a city consciously working to loosen the noose that traffic-clogged highways and overburdened roads have placed upon its growth, they’re trying a gentler approach at educating first-timers than the hard stares of other passengers. The Los Angeles Times looks at how the Los Angeles Metro is using art tours of its stations to introduce Angelinos to rapidly expanding rail system:

They had come for a free tour of public art in three downtown subway stations. They had just been asked to raise their hands if they had taken Metro trains before.

Then artist Alex Amerri, one of the tour leaders, had smiled and said, "OK, so we have some people who are inexperienced."

Not to worry, said Amerri, who also is board president of the Los Angeles County Bicycle Coalition.

In other cities with older subways, he said, "people are more used to being in intimate, tight spaces together. What we're going to do is a small exercise to make sure that we're comfortable with the possibility of rubbing elbows."

It is never too late to learn how to use your city's subway system. This is the real message behind the Los Angeles County Metropolitan Transportation Authority's "Metro Art Moves You" tours, offered the first Thursday, Saturday and Sunday of each month.

They are free. They are fun. They make you notice details you might otherwise walk past. They also provide, for those who need it, generous and judgment-free instruction in TAP cards, turnstiles and train-traveling etiquette.

You can read the full article here. Watching Los Angeles transition from the heart of the Automobile Empire to a 21st Century city is one of the most increasingly interesting scenes in U.S. transportation.