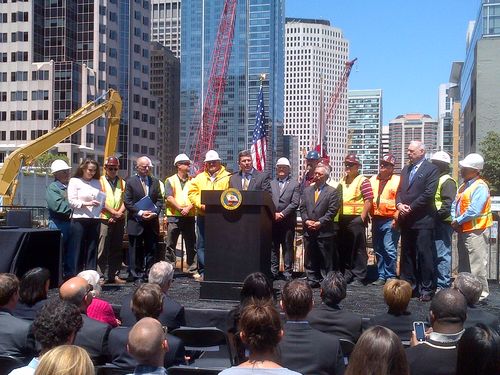 A Sacramento judge ruled today that the California high speed rail project, as currently constituted, cannot tap state bonds approved by voters in 2008. The decision, based on the judge’s interpretation, could cause further delays for the project, which is scheduled to break ground on construction this year.

The Los Angeles Times called the ruling a “major blow” to the proposed service, which would connect Northern and Southern California via 220 mph trains:

Superior Court Judge Michael Kenny issued two decisions Monday, both of them based on findings that the state made key errors and failed to comply with voter-approved requirements as they moved the project toward a long-awaited groundbreaking.

The decisions do not immediately stop the project, but they could sharply curtail the state’s ability to pay for the high-speed rail system in the future.

“We are reviewing both decisions to chart our next steps, but it is important to stress that the court again declined the opposition’s request to stop the high-speed rail project from moving forward,” said CAHSRA Chairman Dan Richard in response to the ruling. “Like all transformative projects, we understand that there will be many challenges that will be addressed as we go forward in building the nation’s first high-speed rail system.”