It’s Not A “Land Cruise”

Back in mid-June, after getting a tour of some newly-refreshed Superliner cars in Chicago, I decided to take the train back to Boston. The most direct route would have been to take the Lake Shore Limited back, but I’ve ridden that route several times, and track work meant no weekday service between Albany and Boston; I’d have been “bustituted” instead. The Capitol Limited was another option, but I’d at least been on that route as far east as Pittsburgh. What really intrigued me was the idea of riding the Cardinal through West Virginia. This was a route I’d never ridden at all, and the schedule lined up so that the difficult-to-time thrice-weekly schedule actually worked out. So I booked the trip to depart Chicago on Tuesday, June 15. As an added bonus, I’d arrive in New York with a few hours to check out the new Moynihan Train Hall before transferring to the “Night Owl” regional train #66 to Boston, taking advantage of the recently-restored sleeper service. I’d get to ride new-to-me routes, take some pictures, and maybe write a blog post about the scenery and the sadly-still-flexible dining.

I boarded the train at about 5:20 PM, and we starting pulling out of Chicago Union Station right on time at 5:45 PM. And then, after about 100 feet, we stopped and waited. And waited. And waited. Eventually, a conductor explained that there was a problem with the locomotive, and they were going to swap it out for another one. For more than two hours, we sat without moving, just yards from where we started. Finally, we were moving again. But we only made it as far as the Amtrak yard just south of the station and stopped yet again, for nearly another hour. Before we even hit our first stop, we were already three and a half hours behind schedule. That delay snowballed, as they often do, and we finally pulled into New York nearly five hours late. Not only did I not get to check out Moynihan Train Hall, we had to do a rushed cross-platform transfer to catch the #66, which Amtrak held in New York for nearly 30 minutes to accommodate the transferring passengers. [Despite this, the #66 was back to within 10 minutes of on-time by New Haven.]

An hours-late Amtrak passenger train is not a new story, nor even a particularly unusual one, so this post isn’t really even about that. So what’s it about? It’s about how we as advocates for (and fans of) passenger rail talk about those delays. Here are some things I heard people say as the delays mounted:

I understand the desire to try to look at the bright side, and I admit to being guilty of having said some of these things myself on past trips. But the fact is, this sort of “land cruise” mentality simply isn’t helpful if we want passenger rail to be anything other than a niche/long vacation mode of travel. If we want more trains, we need more people to ride the trains. And if we want more people to ride the trains, those trains need to be reliable. That’s especially true for the large majority of passengers who aren’t riding the train just for the sake of riding it, and who aren’t riding it from end-to-end. If you’re going from Chicago to New York over 27 hours, a multi-hour delay may not seem quite so bad. But for a fellow passenger who was going from Chicago to Indianapolis, or another who was going from Charleston to Charlottesville, it was devastating. If passenger rail is to survive and thrive in the US, we fans and advocates need to stop making excuses for these delays and start demanding better. 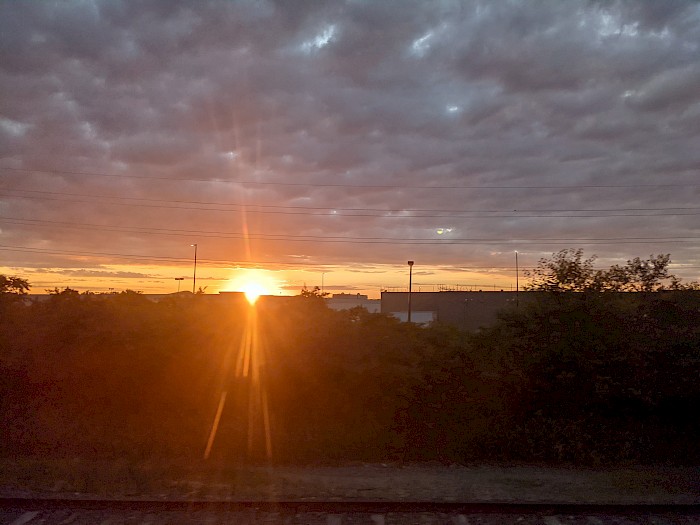 The initial delays were because of unreliable, aging equipment (problems with three separate locomotives, I later learned); the subsequent delays were because of freight interference. Your Association has fought to get funding for new equipment (the new ALC-42 locomotives should start seeing long-distance service in a few months), and has fought time and again over the better part of a decade to get meaningful, every-station on-time performance metrics with teeth, so that they can be enforced. Those years of work are paying off: we’re winning that fight.

We can’t do it without your continued support. Let’s make sure the trains work not just for the “land cruisers,” but for the people who are simply trying to get from point A to point B.

P.S. The scenery on the Cardinal really was gorgeous, and I can’t wait to ride it again when service is daily and traditional dining is restored: these are also fights we can’t win without you.