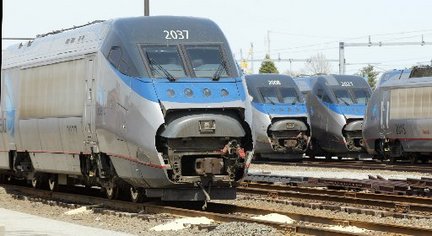 By William Dunn and Abe Zumwalt

Amtrak recently issued an RFP for new Acela train sets, expanding capacity for the service. Those of us with a national perspective might find it easy to criticize the move given the average age of equipment system-wide has climbed to more than 28 years, while the Acelas are only a little more than half that age. However, the move can be justified when considering the amount of revenue at stake.

FY2014 is on course to be the best year to date for the Acela. As of May, ridership is up 6.7% versus last year and is solidly on course to beat all previous years' numbers, likely exceeding 3.5 million passengers for the first time. Revenue is up as well (+11.6%), as ticket yields have continued climbing sharply. Yet underneath these wonderful accomplishments lies one of the most insidious threats to the Acela, and Amtrak at large: impending capacity constraints.

Amtrak has noted an increasing number of days when ridership on the Acela has exceeded 14,000. There were three such days in April and eight in May. These days are significant because the Acela's effective capacity is around 15,800 (assuming that, on average, each Acela seat can be sold once north of New York and once south of New York). Any day over 14,000 riders is likely operating at over 88% of those trains' effective capacity. This in turn translates into significant lost ridership on sold-out trains around peak hours (and often the loss of a round-trip as a result, since a rider who cannot book a trip in one direction is more likely to select a different mode in both directions).

This has also resulted in the Acela playing a key role in helping Amtrak actually approach operational self-sufficiency. In FY13, the Acela contributed a net $236.9 million towards Amtrak's operating budget. In the first eight months of FY14, the Acela has contributed $211.5 million, and the Acela’s cost recovery is over 200% YTD.

While surging revenue (and corresponding profits) are a good thing for Amtrak in the short run, they are side effects of Amtrak desperately trying to head off an impending capacity crunch by raising fares to hold down demand. Faced with increasingly packed trains, Amtrak has been forced to decide in the short term whether to turn away passengers through sold out trains or higher fares. They have attempted to opt for the latter. However, even with multiple massive fare hikes over the last several years, demand has continued in a steady upward pattern, with ridership generally rising with the exception of serious service disruptions.

The surge in revenue and ridership cannot continue indefinitely without the addition of equipment. Once peak trains sell out with regularity, or ticket prices exceed travelers' budgets or companies' expense accounts, frequent customers will increasingly find themselves forced to choose between three options:
1.) Only slightly less expensive, lower-quality Regional trains. Northeast Regional trains take longer than the Acela to get to their destination, but rising fares and sold out trains are becoming more common here as well, thus limiting the viability of this option.
2.) Off-hour Acela trains, resulting in lost productivity waiting in stations for their train. While many passengers may be able to vary their travel by an hour in one direction or the other, beyond that two problems arise: Either excessive wait times in stations will impact traveler productivity or trips will have to be cut short to catch an earlier train.
3.) Other modes of transportation, including a possible resurgence of the Northeast Air Shuttles largely displaced by the Acela over the last decade -- a perverse development when considering airport capacity on the Eastern Seaboard.

While the first two at least keep ridership within the Amtrak system, albeit at the cost of frustrated travelers, it is the third which is the biggest risk as it comes with a chance that travelers who converted from flying to taking the train will "re-convert" due to cost or convenience issues. In such cases, Amtrak's short-term capacity problems have the potential to lose long-term business.

Probably the biggest challenge with respect to resolving this problem is the fact that it will take 4-5 years to order and produce new equipment. As things stand, if the Acela is not regularly selling out by then, it will likely only be because fares have gone up so far that they begin driving away riders in large numbers.

The Acela has potential now that could hardly have been envisioned in the 1990s. With added capacity it is not hard to envision them adding another $100-150 million to Amtrak's bottom line, however trying to do so simply through fare increases is an effort that will not succeed. Getting additional capacity into service soon has to be a major priority for Amtrak.

However, we here at NARP recognize the Acela’s quandary to be representative of the system as a whole. Load factors on almost every service are startlingly high. It is spectacular that we can draw a significant parallel between the incredibly contrasting services represented by Acelaand Amtrak’s long distance trains. Just as certain frequencies aboard America’s fastest train can be impossible to vet, bedrooms on almost all long distance services have been obtainable about as rarely, and only then at astronomical prices. Again, the only constraint to additional revenue generation is the significant and frustrating lack of capacity indicative of this era in American passenger railroading.