How Valuable is the Northeast Corridor to Our Economy? 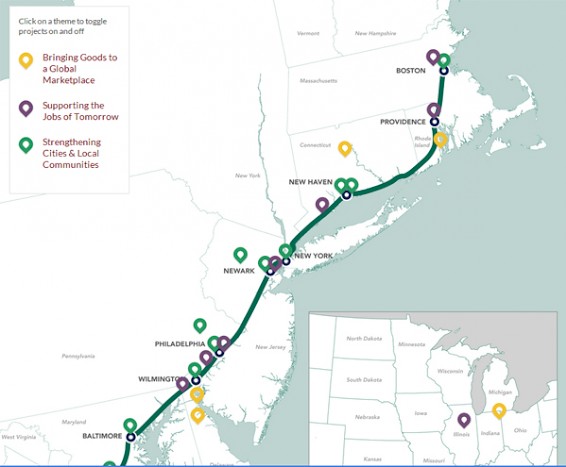 When looking at infrastructure investment—especially for megaprojects that cross multiple jurisdictions—it’s important to look at the case business case for investment. How much will this project cost to complete? What are the alternatives? What is the cost of not improving this infrastructure?

This type of business case is imperative for the Northeast Corridor (NEC), which needs to find $52 billion in capital investment over the next 20 years just to maintain existing levels of service. This doesn’t even touch on the $117 billion price tag for Next-Gen High Speed Rail between Washington, D.C., New York City, and Boston. A new study by the Northeast Corridor Infrastructure and Operations Advisory Commission fills in an important piece of the puzzle by showing that the NEC is worth $100 million per day to the U.S. economy.

“The Northeast Corridor and the American Economy” breaks down the data and makes a compelling case for addressing the infrastructure investment gap:

The Northeast Corridor (NEC) rail network between Washington, D.C. and Boston, Massachusetts is an engine of economic activity for the United States in the delivery of workers to jobs, businesses to clients, goods to market, and people to their friends, family, and leisure activities. Its commuter rail and Amtrak intercity services move 750,000 people each day. Daily NEC users contribute more than $50 billion annually to the national economy.

The NEC is a shared resource, used by eight commuter rail operators, Amtrak, and four freight railroads. It connects eight states and the District of Columbia, but its impacts extend across the country. An unexpected loss of the NEC for one day alone could cost the nation nearly $100 million in transportation-related impacts and productivity losses, roughly the daily economic output of cities like Winston-Salem, North Carolina, Portland, Maine, or Boulder, Colorado.

The NEC Region is home to more than 51 million people and four of the ten largest metropolitan areas in the country. The NEC connects interdependent markets that collectively are a national and global force. Its economy is the fifth largest in the world, ahead of France and just behind Germany. The NEC Region is an international center for education, healthcare, technology, media, and finance, all industries widely expected to fuel economic growth in the 21st century. Research in this report finds that the NEC contributes to the productivity and livability of the Region in ways that increase the nation’s global competitiveness.

The report is well worth the read, and is paired with a very cool interactive map. And the next time someone says “sure, passenger rail is nice and all, but we can’t afford it,” you can respond “at a $100 million per day, we can’t afford NOT to invest in trains.”