High Speed Rail Returns to State of the Union 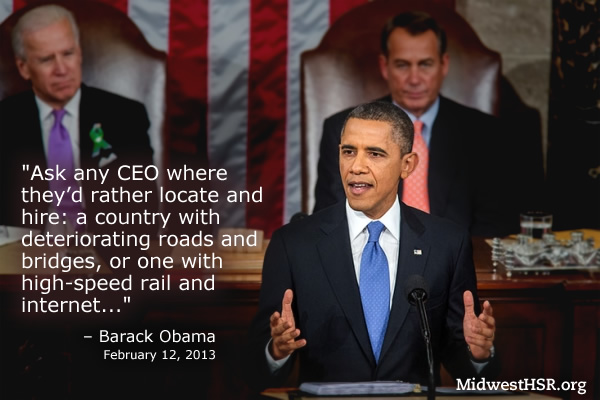 “Ask any CEO where they'd rather locate and hire: a country with deteriorating roads and bridges, or one with high-speed rail and internet; high-tech schools and self-healing power grids. The CEO of SiemensAmerica– a company that brought hundreds of new jobs toNorth Carolina– has said that if we upgrade our infrastructure, they'll bring even more jobs. And I know that you want these job-creating projects in your districts. I've seen you all at the ribbon-cuttings.”

That was the message delivered by President Barack Obama during his State of theUnionlast night. And it’s a message that should hearten passenger train advocates across theU.S.

The President put forth a "Fix-It-First" program that echoed past infrastructure proposals. It would identify $50 billion in additional infrastructure spending, emphasizing state-of-good-repair work. The intent is to shore up the country’s aging infrastructure while creating near-term jobs on projects that can be approved quickly. The plan would include a provision that leveraged public investment to attract private-sector capital to upgrade businesses-critical infrastructure, transportation-related and otherwise.

“President Obama knows what we at DOT also know: fixing the roads, rails, bridges, ports, transit systems, and other transportation assets most in need of attention will create jobs and help our businesses compete more effectively,” argued Transportation Secretary Ray LaHood in a Fast Lane entry posted this morning.

LaHood was joined by Members of Congress from both sides of the aisle.

“While our transportation systems are crumbling beneath us, some of my colleagues are unwilling to invest in even our most basic infrastructure needs,” said Senate Commerce Chairman Jay Rockefeller (D-WV). “We need critical investments in passenger rail — as well as rebuilding our roads and bridges—to give our citizens the best chance to compete in the 21st century.”

“I think he’s lying about CEOs,” said House T&I Chairman Bill Shuster (R-PA) to Politico. “They want to invest in a country that has high-speed rail? Really? Tell me what CEO said that.”

However, Shuster walked those comments back this morning, softening his rhetoric.

“Last night I was quoted in response to the president’s State of the Union address that I implied he was lying about CEOs wanting to invest in a country that has high-speed rail,” said Chairman Shuster at a U.S. Chamber of Commerce event on infrastructure. “This type of incendiary rhetoric is not my style. I regret using those types of words. While I continue to disagree with the president on this point, I do not think the president is a liar.”

While Shuster maintained his oppositional stance, this more bipartisan tone may be a positive sign. With a massive capital investment backlog facingAmerica’s passenger rail network—and infrastructure, in general—the time to act is now.