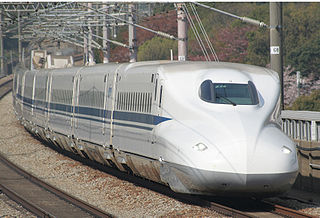 If Texas Central Railway succeeds in building its high speed line, you can expect to see American copies of the Japanese N700 speeding between Dallas/Fort Wortth and Houston. Licensed through Wikimedia Foundation.

When Americans think of high speed rail, we’ve typically thought of Amtrak’s Acela Express on the Northeast Corridor. More recently, we’ve also thought about California’s ongoing construction of a 220 mph line between Los Angeles and San Francisco, which, when complete, will be the fastest rail line in the country. In both cases, however, the basic impression is the same. High speed rail has been typically understood as a “blue state” project favored in states controlled by Democratic governors and legislatures. As we’ve discussed in the past, this correlation has created the unwarranted and wrongheaded perception that transportation investment is a partisan issue. In California, after all, Republican Governor Arnold Schwarzenegger was a champion of the state’s high speed rail initiative. Investment in all modes of transportation is a national necessity, and it ought not be subject to the vagaries of partisan bickering.

Fortunately, business and community leaders in what is widely considered a “deep red” state are working to change this perception, and are showing the central role rail plays in our transportation network. The Texas Central Railway (TCR), a recently formed consortium of investors, public officials, and transportation experts, has announced its intention to bridge the 240 mile distance Dallas/Fort Worth and Houston with a high speed line in the next decade. To do so, TCR has partnered with the Central Japan Railway Company to adapt advancedShinkansen train sets for usage in the United States. Using these trains will allow the line to reach top speeds of 200 mph, enabling a less than ninety minute trip between the two cities; half the time of a comparable car or bus trip. TCR officials also anticipate that fares would be competitive with airline fare, offering Texans an alternative to increasing ticket prices and time-consuming hassles at airport security.

What makes TCR’s proposal different from California’s? After all, neither project will require an operating subsidy. The primary difference lies in the scope. As a much lengthier and more complicated project, California High Speed Rail is chiefly financed by public sector appropriations. TCR, on the other hand, as a project of more limited scope, will be financed by private investors. That said, we can expect that TCR will take advantage of federal financing programs, including RRIF and TIFIA, that allow railroads to make capital investments while avoiding high interest rates. Another private passenger rail venture, All Aboard Florida, has used these programsto help finance equipment acquisition for its Orlando-Miami service. Thus, while TCR will be unique in its largely private financing, it will likely benefit from public investment.

Texans of all stripes have endorsed the proposal. As we mentioned in the March 28 Hotline, the mayors of Dallas, Fort Worth, and Houston have endorsed the proposal, believing TCR will offer an “innovative alternative” that will relieve the area’s transportation problems. The Texas Transportation Commission is also confident that the project will play an important role in offering Texans more travel options. Commission Chairman Ted Houghton noted (as we’ve also discussed) that airlines are scaling back short-distance operations, meaning that high speed rail would fill a void created by discontinued flights. Fellow commission member Jeff Austin agreed: “If people are going to continue moving here, we’ve got to find different ways to move them.”

We would urge our readers to look at TCR’s claims with a healthy dose of caution. The project has yet to attract investors or acquire the land for the right of way, meaning that any projected start date is tentative at best. Land acquisition, as California High Speed Rail’s case proves, can result in contentious litigation that delays construction and raises overall project costs.

Nevertheless, we applaud TCR’s goal of building and operating a high speed line between Dallas/Fort Worth and Houston. High speed service between these two cities will further support the development of the national passenger rail network, and will complement existing Amtrak services. Passengers on the high speed line would, for example, be able to change to the Texas Eagle at Dallas for trips to Chicago and Houston, and to the Sunset Limited at Houston for trips to Chicago and New Orleans.

The story of TCR’s quest to build a high speed line confirms what rail advocates have long known: passenger rail isn’t a blue state or a red state thing, it’s an American thing. If passenger rail can find a willing audience in one of the most conservative states in the country, then it is clear that rail’s utility is beyond doubt. All Americans, whether liberal, conservative, or moderate, can agree that our nation’s transportation future rests on balanced, multimodal investment.