All aboard from Los Angeles to San Francisco with the nomadic and bohemian art project, Station to Station.

So often in the business of advocacy, we feel compelled to bleed our arguments of enthusiasm—to strip every element that can’t be quantified, lest our seriousness be called into question. Certainly, we may speak about the impressive capacity for economic development around Passenger Rail stations. We can present the mode’s ever growing popularity in its exploding ridership. We highlight the energy efficiency, efficient land use, and comparative lack of emissions inherent of passenger trains.

However, as sound an argument as that all makes in favor of passenger trains, it doesn’t tell the full story. Political salience may fuel a pre-existing passion for rail travel, but it is less likely to inspire it. “Almost anything is possible on a Train” wrote Paul Theroux, one of our greatest contemporary travel writers. From a cultural and sociological standpoint, the train is the mode of transport equivalent of a coffee shop: a collaborative space to take in the changing environment and landscape. In comparison, a trip by air or bus is more akin to instant coffee.

Visionary artist Doug Aitken must have been aware of this distinction upon conception of a project so holistic as to change our perspective on what a music tour can accomplish, because of course it was more than just that. Station to Station was a caravan of all artistic intent barreling across the country at high speed. While there was material preconceived for the event, there were also café cars that shed their seats for use as a mobile music recording studio, and a video editing lab. In the event of passing from one end of the train to the other, one at times had to dive under active cameras, filming pieces of kinetic art designed to dance with the movement of the train. The musicians and visual artists passed their time in glorious ex-Milwaukee road lounge cars laden with art books, coconut water, and Coors heavy. The spirit was more than convivial; it was inspirational. In the process of a tour that linked places as disparate as St. Paul, Minnesota to Winslow, Arizona with a slew of avant-garde media, art was created in the process of the trip of a quantity intended for release over the next several years. Rarely do mere tours leave so much in their wake. Perhaps most significantly from our perspective, many of the artists came away with an entirely new sense of what travel can be. 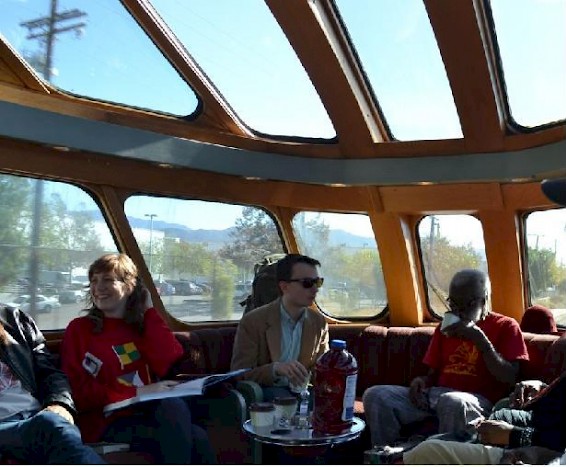 Abe ruminates on train travel with The Congos

“This is religion, man. You sit on the train, and your stress just disappears over the miles with the scenery” a singer in the iconic Reggae band The Congos remarked from the Skytop Lounge. There were scores of young photographers that seemed completely entranced by the discovery of such a significantly different vantage point. With very few exceptions, the passengers on the train were all exploring and luxuriating in a strangely new experience, at least the ones who weren’t busily editing film or coordinating what would become the “happening” we were speeding towards in Oakland, CA. In a way, we rail advocates have to thank Doug Aitken for conceiving of a project with such a delicious subliminal effect: the train may have been a means to an end in the spirit of artistic collaboration, but in the same fell swoop, the trip exposed hundreds of culture makers to what train travel can be. For the overwhelming majority, the experience appeared to be an influential one. Malcolm Kenton of NARP and myself were invited on board thanks to a generous Airbnb competition because, after touring aboard the train for several weeks, the only void in what certainly must have been a far-ranging and colorful discourse was a voice concerning the literal conveyance allowing the activity to happen. We were needed to enable further appreciation of what, to the majority aboard, was an unknown and exotic experience through the vivid and varied landscapes of the United States. We were only too delighted to meet the occasion, and be a part of what we consider to be a significant event in the cultural reawakening to the train travel experience. The Pulsating lights affixed to the flutes of the cars only made more dramatic the timeless exchange of waving at the passing train. Hypnotic incentive aside, the reason for this tradition speaks of a kind of magic. While the travelling public knows well the route of the highway, the path a train takes is more of a mystery—upon the sight of a passenger train, perhaps one waves to make a momentary connection as the speeding machine glides off to parts unknown. While a child may request a horn blast from an 18 wheeler on the highway, it would seem odd to wave at them, or at an intercity bus for that matter. It is futile to make any kind of personal connection from the ground when arching one’s neck at a speeding aircraft. Given this, upon the experience of actually riding a train, the sensation of public recognition, and at times, adulation, is palpable. Mark it down as one more reason why this train made such an ideal vehicle for a concert series. But the concert itself that Malcolm and I were afforded the opportunity to attend was also noteworthy. Taking place in Oakland’s magnificently dilapidated 16th Street Station, was without a doubt a "happening," as per the nomenclature of the tour. Atmospheric noise augmented the somewhat apocalyptic scene with abstract experiments of light, shape, and color in the form of interactive yurts sprouting up in front of the station. The concerts themselves happened at various other “stations” situated throughout the massive site with light and sound guiding the 3,000 or so guests from venue to venue, making the event a journey in and of itself. Massive visual projectors emanated from inside of the station, filling the faded beaux-arts jewel box with life and activity once again. Glamorous attendees soiled their polished shoes, high heels, and boots in the gravel on site as they explored this incredible environment. The whole experience felt unearthly and, much like the rush of sound and excitement that comes with greeting a passing train, it was over and done with all too quickly. The last piece was a highly interactive symphony coordinated between artist Dan Deacon and several hundred synchronized audience cell phones. He wrapped up the tour with the divinatory phrase, “see you in the future,” speaking for all involved with the project. We certainly hope to take him for his word.