Green groups should join the call for transportation reform

Many of the major national environmental groups are backing a campaign to pressure major institutions—local governments, universities, nonprofits, religious organizations and businesses—to divest their bank accounts, endowments, pension funds, etc. from fossil fuel companies. Some of the green groups are also calling for funds that are divested from fossil fuels to be reinvested into “clean energy and socially responsible alternatives.” Unfortunately, transforming the transportation system into one that provides equal or greater mobility using a lot less energy—which is possible if trains and transit are at the center of the system—has not been an explicit goal of this movement.

Whether one’s focus is on tackling climate change or on US energy independence, greater investment in trains and transit should be a central pillar of any set of national energy policies. A turning steel wheel in contact with a steel rail reduces by 85-99% the amount of rolling friction than a rolling rubber truck tire has in contact with an asphalt or concrete pavement. Trains also carry many more people with one engine than any other form of motorized overland travel: “Freeways cannot exceed a flow of 2,000 automobiles per hour per lane without inducing congestion; whereas light rail can serve up to 12,000 passengers per hour on single tracks, depending on headway frequencies and the number of rail cars being coupled together.” (Seattle Transit Blog) 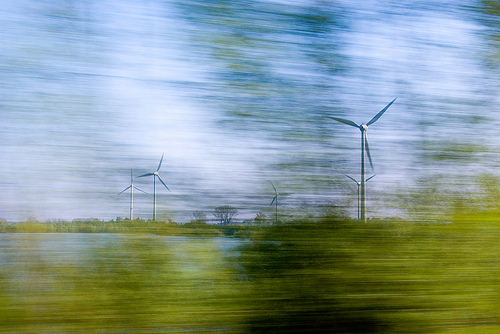 Wind turbines seen from a train, in Germany.

Additionally, stations served by frequent, reliable trains connecting them to multiple destinations serve as incomparably effective anchors for flourishing local economies. They create the kind of places that are more desirable to live in and require less energy to navigate, lowering families’ transportation costs. Given our rising population, our transportation infrastructure will have to increase in capacity, and how we choose to accomplish this task will have repercussions on the quality of American lives for generations to come.

Yet we seldom hear the major organizations that most vocally bemoan America’s outsized energy consumption—more than twice as much per capita as the United Kingdom, for example—calling for a rebalancing of our federal and local transportation priorities. The handful of transportation-focused advocacy groups, along with a few forward-thinking business associations, form the small coalition calling for trains and transit to be capitalized at the same level as highways and aviation. Where are the voices of the green groups on this issue?

Transportation accounts for 28% of America’s energy use. Of that, 81% comes from highway vehicles and 8% from aircraft, both of which almost exclusively burn petroleum. While most American trains and buses also burn petroleum, Europe and Japan, and even China and India, demonstrate electrified trains’ potential. Trains are the only form of transportation capable of moving large numbers of people long distances using only electricity, having done so for the past century. It will be far cheaper and easier to produce electricity using renewables on the scale required to power trains than it would be to convert a significant number of cars, planes and buses to non-petroleum fuel sources—particularly electricity, given the current state of battery technology.

We look forward to the environmental community becoming a stronger voice in the growing coalition calling for more rational transportation policies that give Americans greater freedom of travel choice. Given that transportation is integral to how we structure our cities and our lives, these groups should be part of the choir; it’s too bad that they seem to need more preaching to.